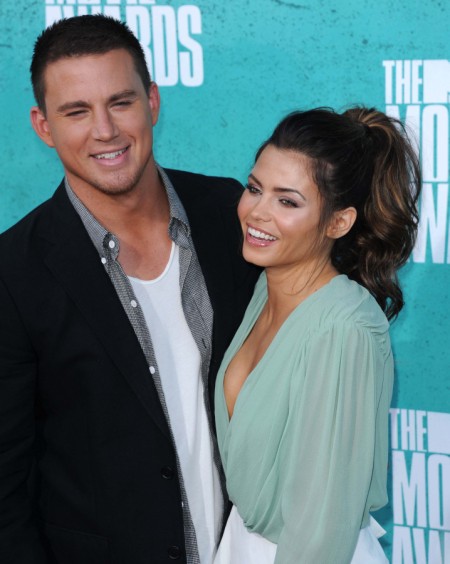 Channing Tatum is riding a high that many actors can’t even dream up. His last few movies including The Vow, 21 Jump Street, and Magic Mike have all been box office success stories and he’s already working on a stripper sequel. Now, just this past weekend, Channing was spotted with his wife, Jenna Dewan, vacationing with George Clooney and Stacy Keibler in Lake Como. To quote Lainey Gossip who likes to ask “How did she DO that” whenever Blake Lively scores a hot role or an A-list dude like Leonardo DiCaprio or Ryan Reynolds, I will now ask that of Channing “I can make my cheeks flap” Tatum – How did he DO that?

I don’t have the pics but you can check them out on Radar Online. Channing and George look like they’re having a great time. Channing looks relaxed as all hell. Channing, who just a couple years ago was cast as the obligatory hot dude in an Amanda Bynes movie, is now hobnobbing with Gorgeous George. How did he DO that?

Well, we can start by playing Hollywood musical chairs with this one. Channing is now tight with his Magic Mike director, Steven Soderbergh. Soderbergh directed Clooney in a slew of films including the Ocean 11 movies. Soderbergh is supposed to make the Magic Mike sequel with Channing. Are they thinking of getting George involved? Do you want to see George in a thong any time soon? I have to admit, I’m interested in the possibilities….

I think the bigger message here is that Channing is a power player in Hollywood right now and even George is taking notice. Say what? That’s right. Channing Tatum is making people take notice. He pulled a Blake Lively and wasn’t afraid to flash his junk and it paid off, big time. Are you surprised? When you watched him mumble through his dialogue in Step it Up, Dear John and G.I. Joe, did you ever think he’d be vacationing with George Clooney in a boat that has seen the likes of Brad Pitt, Matt Damon and Emily Blunt? I have to say… me neither! You have to give credit where it’s due because George might slum in the bedroom but he does not slum in the boardroom. If he thinks Channing is someone to notice, then we all better start opening our eyes. How did he DO that?

Let me know what you think. Does Channing have what it takes to be a mover and a shaker in Hollywood or will his luck run out sooner or later?