Charlize Theron And Keanu Reeves In Love And Dating Again? 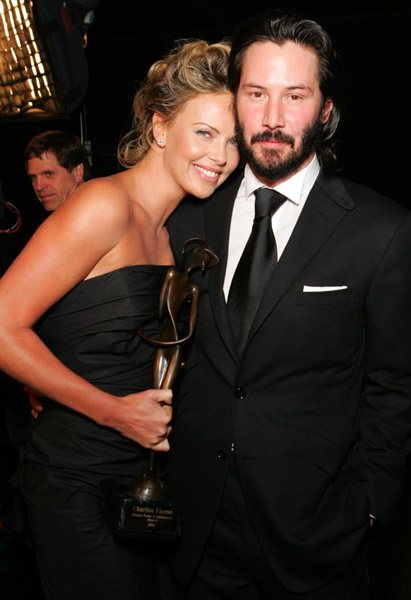 In Touch Weekly is reporting that Charlize Theron and Keanu Reeves are once again ‘friends with benefits.’  Naturally this makes a nice story – all that is missing is the evidence!  Charlize and Keanu have been linked in the past – but as we know nothing ever came of those rumors.

In Touch found a ‘friend’ of Charlize’s who is allegedly spilling on her private doings with Keanu – with such good friends who needs enemies?  From In Touch we learn: A pal says the former co-stars have gotten closer since Charlize brought home Jackson and friends think a rekindled romance is inevitable. ‘They were friends with benefits in the past,” the friend says, “but now it’s something more.’

Keanu is apparently an enthusiastic papa: ‘He babysits and brings toys when he visits Charlize and Jackson,’ the friend reports. ‘He even built the crib and changes diapers!’ How lucky can Charlize get?

Back in 2010 we heard that the pair, who happened to play lovers in 2001 movie Sweet November and also starred together in The Devil’s Advocate, had begun a steamy romance … but that was fiction.

Then again a year ago in 2011 a Star insider reported ‘whispers of a romance’ between the two and then went on to predict that Charlize and Keanu ‘will make their debut as a couple’ when they ‘relocate to Britain in the coming weeks so she can shoot the drama Prometheus while he films 47 Ronin.’

What can we say – of course Charlize and Keanu might be a secret couple – but so might Charlie Sheen and Lindsay Lohan.