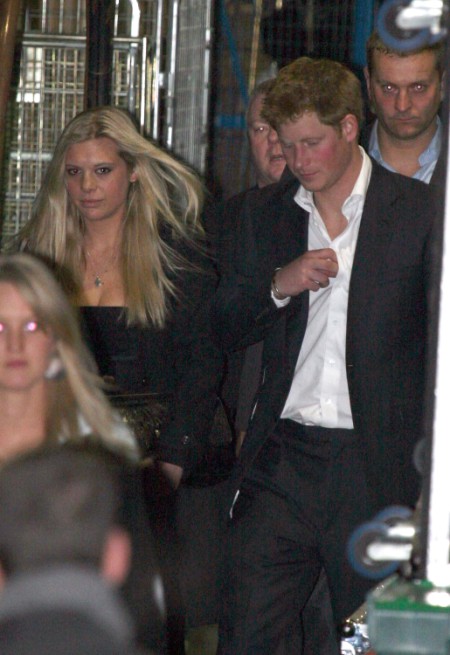 I’ve been waiting for Chelsy Davy’s reaction to Prince Harry’s shy balls! Harry’s on again/off again love of the past six years was NOT impressed by his lost weekend in Las Vegas (nor his subsequent use of handicapped kids to revamp his image) and has ordered him to stop harassing her!

See? Some might label a prince calling them while inebriated in the middle of the night courting! Oh, but not my feisty Zimbabwean. No, according to Now magazine, Chelsy’s finally had enough. I think I’m more heartbroken than Harry!

“Harry had got into a habit of drunk-dialling Chelsy or texting her, but after Las Vegas she’s told him to stay away,” a source told the magazine. “She feels as though he’s made her look like a fool because she’d been telling her friends he’d changed and they were going to meet up.”

This is why I know the media has respect for Chelsy. She is NOT Cressida Bonas. She did not brush the scandal off and stand by her man. The media doesn’t even try to play Chelsy that way. We can all gather this story is most likely for sh-t. Chelsy has never talked and she never will, nor will her friends. But the tabloids don’t make her out to be some sad sack debutante waiting around for a prince like they did some other royal girlfriends (cough, Kate Middleton). No, Chelsy has balls and won’t stand for Harry’s naked ones.

Having said that, do I believe Prince Harry drunk dials Chelsy? Of course I do. He’s a mess and a fool when he’s drunk… and he’s his father’s son. There’s a familial trend of not letting old romances die. And despite Chelsy’s (completely made up) protestations, you know she and Harry are going to hook up again. If we learned anything by Harry’s little scandal it’s that he isn’t serious about Cressida – or at least he’s not serious enough to stay faithful. And yes, I consider hugging a naked chick from behind while you yourself are naked cheating. Those aren’t the actions of a truly committed dude.

So Chelsy told Harry to stay away. Naturally, Harry won’t because the best way to keep a prince is to tell him he can’t have you. It worked for Camilla Parker-Bowles and look how she’s doing. I will NEVER compare those two women again by the way! But you get my point. The worst thing Cressida could have done is take Harry back so easily. Kate Middleton’s a push over and even she made Prince William work for it the last time he dumped her and wanted her to take him back! Well played Chelsy Davy. Well played.

Do you believe Harry calls Chelsy after a few beers? Will we ever get our Duchess Chelsy?