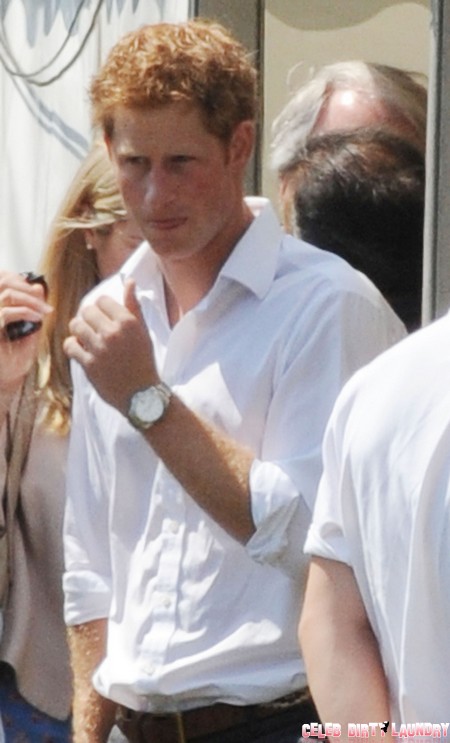 Prince Harry’s naked romp in Vegas has become legend. You saw the pictures a few weeks ago (seriously photo shoppers, is there no technology to make them less blurry?), and we’ve all been hearing the rumours: that there is a video (please, Lord, let there be a video), that Kate Middleton has agreed to distract the media (impending visit from the stork?), that William can’t stand to look at his brother, but most shocking was the full story from Carrie Reichert, who partied with the prince that fateful night.

We are now hearing that Harry’s girlfriend (whom he’s been seeing for just over a month) is in no rush to dump the party Prince. Cressida Bonas, a British heiress and model, is unfazed by Harry’s wild night, reports nydailynews.com.  It would seem that their epic love cannot be broken by photographic evidence that her boyfriend was giving naked hugs while drunk.

Now, I completely understand where Cressida is coming from. Were I fortunate enough to be dating Harry (and I must say, I think we’d get on so well!), trivial blips like cheating, drug and alcohol abuse, and a worldwide scandal wouldn’t have a chance of breaking our rock-solid foundation.

But, I’m not an heiress who could conceivably marry anyone she wants. Come on, Cressida! Have you learned nothing from Chelsy Davy. We reported a few months ago that Chelsy doesn’t want to commit to the strict royal lifestyle and give up who she is.  It is an admirable sentiment, but I was never team Chelsy. Did you see her at last year’s royal wedding? She looked like a mess—and not a hot one.

What will it take for Cressida to admit that her relationship with Harry won’t last? Sources have claimed he went wild to ensure another deployment to Afghanistan. With him abroad, how can she even think their relationship will grow? No, I think we will be seeing a single Harry for another five years or so, before he grows out of his devilish, boundary-pushing, phase.

Should Cressida give herself more value and dump the prince?