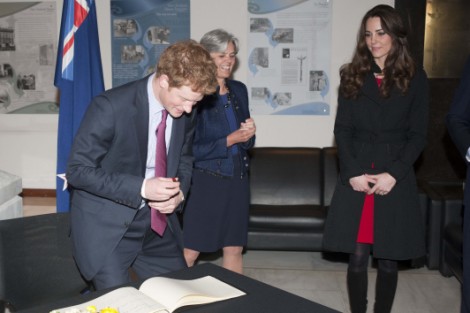 Let’s just start calling her Catherine the Redeemer because she is now the patron saint of f-cked up causes. Kate Middleton has been put on this earth to save the Monarchy from itself and her first royal duty is to revitalize Prince Harry’s busted image and remove the shot of his ass crack from our collective consciousness. The Queen needs to get that embargo off Kate’s uterus ASAP because if the Windsors ever needed a royal baby announcement it’s now.

Kate, Harry and Prince William are a package deal. They are the Holy Trinity of the royal family and have plans to remain that way for years to come. If one falls, the other two must help it rise back up. And Kate’s role has never been so important. She will give the Father a son and try to lift that ginger Spirit.

But the baby will take time. Kate can’t just get pregnant and know about it over night, assuming she and William have finally been given the green light to start procreating. What can Kate do NOW? She has to do something. No one else in that family has the power to grab a cover or turn the tide like Kate Middleton.

Although the palace has yet to make a comment, it’s already got its PR machine in full gear. Prince Harry’s friends are coming to his defense. Alex van Straubenzee, whose son Thomas has known the prince since childhood, told the BBC News that “more than anything he is a British soldier. He has a very, very good qualification in the job he does for the Army and I think this is what people will look at” and that what he called “tittle-tattle” will blow over.

That might be oversimplifying things although I have no doubt it will blow over… with a little help from Kate. The Paralympics are coming up next week. Kate, William and Harry are official ambassadors. How much you want to bet Harry and Kate will be front and center with as many athletes as possible? Prince Harry’s charisma is dynamite on camera but put him next to a physically-challenged kid… that’s not playing fair.

But the royal family can’t afford to play fair. Harry got caught cupping his testes during his grandmother’s Diamond Jubilee year with his grandfather practically at death’s door! This is no game between gentlemen. The palace needs to pull out all the stops to convince us that Harry isn’t as big a f-ck up as he lets on or, at the very least, he’s harmless. So we need some pics of Harry tossing inspiring one-armed kids in the air. And some misdirection. I have a sneaking suspicion there will be more hugs between Kate and Wills during this Olympic go around. Maybe some more hand over the belly shots? Or if the palace was really smart, it’ll have Kate pass out. Nothing says early pregnancy like a good fainting (or at least that’s what all the Jane Austen books tell us).

Yes, get ready. Catherine the Redeemer will be out to save next week and we will forget this little ‘ole mess ever happened. Who has time for Las Vegas penis gate when the royal baby bump show gets on the road? Oh, and I’m telling you, cue Chelsy Davy. If Kate’s smart, she will have already made that phone call. Chelsy needs to get her ass back in the picture. Obviously Harry can’t handle being alone. He needs a partner. Kate’s been looking for a good wife to help Harry get over his South African beauty but perhaps she should redirect all her energy and just convince Chelsy to come back. Maybe if the message comes from Kate, the prospect of royal life won’t be so terrifying for her.

See? Catherine the Redeemer is a godsend to those royals who have no idea how to control themselves. If there’s anything Kate’s good at, it’s self-control.

Do you think the royal family has already briefed Kate on her PR duties next week? Will we hear about a royal baby on the way a lot sooner than expected?