Is Prince Harry Hooking up with Jennifer Lopez in Vegas? 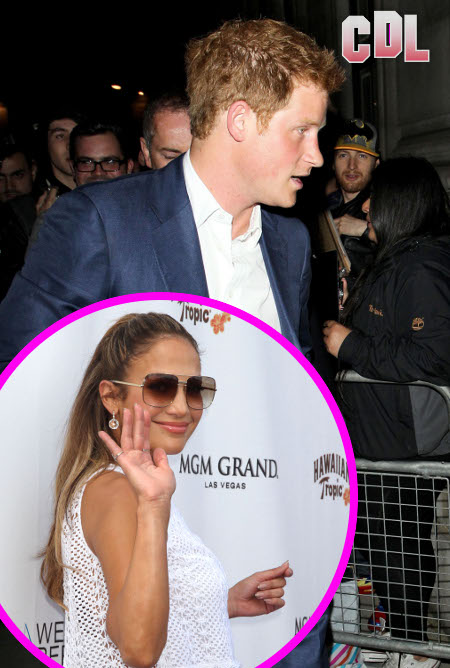 Is British royalty Prince Harry hooking up with Latin royalty Jennifer Lopez in Las Vegas? As much as we would love to see her totally kick Casper Smart to the curb, sail away to England, and hookup with the British Royal Family, it looks like we will just have to keep dreaming. While Prince Harry did attend a wild and crazy Las Vegas pool party this weekend, sources say that he wasn’t all too interested in Jennifer Lopez, who also made a spicy appearance at MGM Grand’s Wet Republic.

A source for E! News said that it was the Prince’s first time pool partying in Vegas. “He was with a group of around six to seven friends and just wanted to have fun with the boys,” the source says. “He was in town to take a break and have fun.”

So, did Harry meet a lucky lady while splashing away in Sin City? Even though we all know he’s madly in love with his brother’s wife, Kate Middleton, he really must find himself a lady so he can make a whole bunch of royal ginger babies. However, even though a Las Vegas party club/bar seems like the ideal place for a British prince to score a future bride, the source says he didn’t have much luck — or that he wasn’t really interested in anyone there.

“There were some girls in their area. But I didn’t notice Harry paying attention to anyone specific…J.Lo was also there — for an appearance. But Harry did not seem to get particularly excited by her presence. He was in his own world with his friends.”

Well, we all know the ginger prince knows how to party. Everyone who saw him at the club noticed him having a really great time: swimming, hanging with friends, dancing to some hoppin’ music, and even spending some special time with a blow up whale floatie in the pool. You know what they say, Harry . . . what happens in Vegas stays in Vegas — unless of course you’re a British royal, in which case certain stories may stick with you for an unfortunate amount of time. Good thing he didn’t make a fool of himself. What would you have done with news of a Prince Harry and Jennifer Lopez hookup?