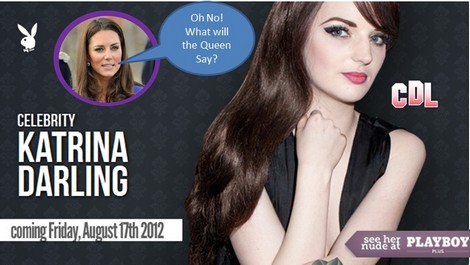 Kate Middleton’s behavior has been above reproach for at least as long as she has been The Duchess of Cambridge.  Since marrying Prince William, Kate has enjoyed a meteoric rise in popularity unseen since William’s mom, Princess Diana’s.  It is fair to say that Kate receives as much media attention as any Hollywood A-lister and almost all of it is extremely positive.    As we have mentioned here at Celeb Dirty Laundry, Kate is by far the best thing to happen to British Royalty in many years.

But the behavior of Kate’s family has not been above reproach.   When one is married to the future King of England and will one day be Queen (technically, Queen Consort) the expectations placed on one’s family are stringent.  Not only is Kate’s family expected to walk the line of strict propriety for the public’s consumption but also to help Kate maintain her status amongst the senior royals.  Some of these senior royals, particularly Prince Charles’ second wife, the devious Camilla Parker-Bowles, and William’s jealous cousins the ‘blood’ Princesses Eugenie and Beatrice, hate Kate and resent her popularity.  It is an open secret that it was jealous rage at Kate’s privileged position during the Diamond Jubilee celebrations that prompted Queen Elizabeth to attempt to appease these churls by enacting the notorious ‘curtsy protocol.’  Now Kate is forced to curtsy to the blood princes and princesses whenever Prince William is not around.   Even worse, Camilla has been trying to make Kate’s life a royal hell by any means at her disposal.

When Pippa Middleton decided to enjoy a little Parisian vacation replete with kinky-sex costume parties and drunken criminal activity it was Kate who bore the brunt of her sister’s self-indulgent euro-trash behavior.  Of course Pippa was brought to heel quickly enough.  Just like the rest of the Middletons she has so much more to gain from Kate’s current and future position by behaving decently then by giving in to her naturally wild and greedy character.

Now Kate is in big trouble and there is nothing much she can do about it. Her enemies in the palace will make much of the fact that Kate’s distant cousin, Katrina Darling, is covering the September 2012 issue of Playboy!  Can you believe it?  Camilla is in her glory as she prepares to trash Kate to the best of her ability.  Kate’s commoner origins will be laughed at behind her back and the disdain will simply drip off of the already insufferable senior royals whenever William is not around.

GLOBE Print Edition, August 20 tells the sad story: The sexy cousin of Prince William’s wife is baring all in Playboy – and now pretty Kate fears her scheming mother-in-law Camilla will use the photos to tarnish her reputation with the Queen, say insiders. “Those sexy photos of Katrina are the last thing Kate needs,” a palace source tells Globe. “Kate really doesn’t care what her long-lost cousin does – it’s her life.”

“But her big fear is that cruel Camilla will use the pictures as ammunition to slur Kate’s good name once again in the eyes of the Queen.” Since Queen Elizabeth is an 86-year-old with old-fashioned values, she’s not likely to think highly of common-born Kate having a stripper as a member of her family, says the source.  “It could easily taint Elizabeth’s view of William’s wife,” the source adds.

Camilla already accused Kate of embarrassing the royal family just by wearing a bikini on sun-drenched beaches – and branded her ‘brazen Hussey’ when THOSE pictures surfaced. “So Camilla is capable of planting the seed that Kate actually condones her cousin’s lifestyle.”  But Kate hasn’t even met Katrina – and has no intention of doing so!”

Ironically, Katrina, who also models lingerie, is unknowingly playing into Camilla’s hands by publicizing her Royal relationship. She calls her burlesque act, which features a patriotic theme and a crown, God Save the Queen.

Katrina, however, hides very little in Playboy. Says the source, “Kate knows that Katrina’s strip show is fodder Camilla won’t be able to resist in her never-ending campaign to discredit the young royals in the palace.”