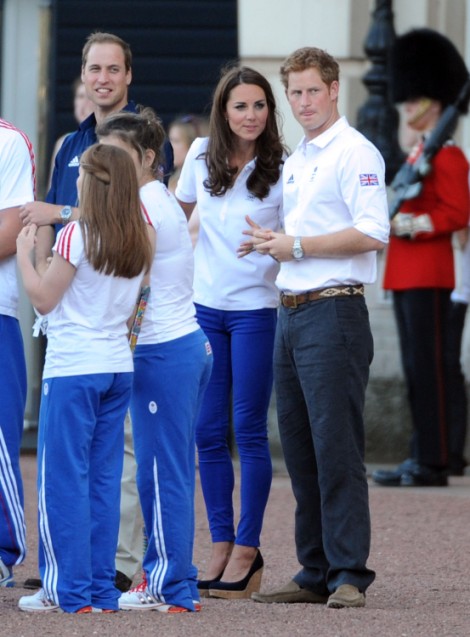 The Prince Harry wife stories are in overdrive this week! Kate Middleton needs to get knocked up soon because apparently she has too much time on her hands and has taken it upon herself to help Harry settle down into domestic bliss like her and Prince William. But it gets more embarrassing than that because now she’s enlisted the help of her female cousins-in-law, Zara Phillips and Princess Beatrice!

She’s planning to sit down with Bea and Zara to go through a list of people they know to see who might be a good fit for Harry,’ says our source.

‘If he was the kind of guy that didn’t care and wanted to play the field, then Kate wouldn’t be putting so much effort into it.

‘But he’s serious about settling down.’

Kate, 30, is organising her sisterly duty with military precision, as she knows not everyone’s suited to their lifestyle.

Where are all these stories coming from? I can’t help but wonder if the “Kate flirts with Harry” stories were getting railroaded because people just don’t want to think or say anything negative about their princess right now (we use Pippa Middleton for that) so the tabloids changed tactics. Now matchmaker Kate Middleton is all the rage! Whatever, she can consult and gossip and peruse the rolladex of all her friends just as long as she settles on one name – Pippa.

You know what I like the most about Now magazine’s story though? The sentence: “…as she knows not everyone’s suited to their lifestyle.” Did you catch it. Now, it’s “their lifestyle.” Very telling, no? With the success of the Olympics and her overwhelming popularity, Kate is officially one of them. Oh but the palace can’t let that happen. What’s worked for their PR machine so well these last couple years is that Kate is not one of them. Kate is a commoner. Kate is one of us. Kate showed Prince Charles how to use an iron and Prince William how to cook.  How will the palace figure that out in the future? The beauty of Kate Middleton’s image is that it’s not platinum but rather white gold (which looks just like it but is half the price). Maybe finding a wife for Harry is self-serving. Get another girl in there and Kate can relax and grow into her role as she shares the attention?

I doubt that will work. But it is an interesting thought. How can Kate keep her common touch as she grows to be a royal power player? Will there be a backlash? There’s always a backlash. Or do you think she’ll be so popular it won’t even matter?