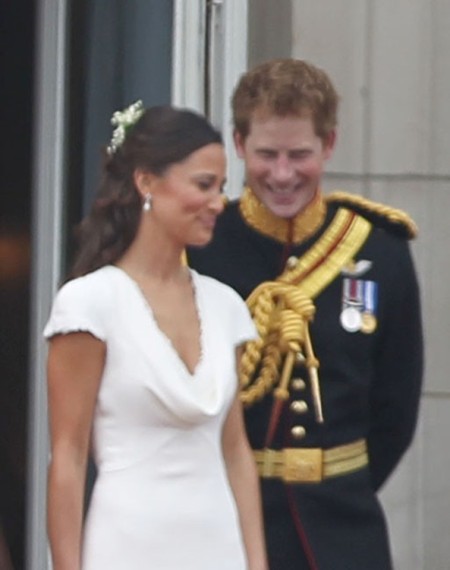 Today was perfect. Birds Sang. Babies laughed. The world was as it should be. Today is the day we found out Prince Harry and Pippa Middleton are dating.

Reports are circulating that Kate Middleton and Prince William’s wedding promise has finally been fulfilled. All that flirting couldn’t possibly have been for nothing. Apparently, the Ginger Casanova wanted to wait until the media scrutiny regarding the best man and best woman took a nose dive before he made his move on the equally available and equally up-for-anything Princess Pippa. They’re taking it slow and it’s casual but that isn’t stopping me from imagining the look on the Queen’s face when she finds out!

According to Grazia magazine via International Business Times:

“He’s always fancied Pippa rotten, but over time the attraction has definitely grown. She’s not quite sure what to make of it, in all honesty. She likes Harry enormously but finds it hard to believe that men like her for herself – even him,” the source explained.

According to another Royal insider, Harry, who previously dated Chelsy Davy, wanted to avoid dating the 28-year-old socialite straight after the wedding because of all the media attention surrounding them. Their  date at an English country pub comes as the pair continue to bond over their shared sense of humour and their love of partying. “The fact that he let the dust settle before making his move is a positive thing. Kate and William’s wedding was such an unreal time, any decisions made back then would be pretty questionable. Harry has shown a level of maturity that people don’t realise he possesses,” the source said.

OK, I need to reel myself in and take breath. Grazia isn’t exactly The New York Times. Hell, it’s on the same level as Now magazine – good for entertaining but not exactly sticklers for the whole truth. When something’s too good to be true it usually isn’t. There’s a very large, very nagging part of me that knows this rumor is probably for sh-t. Last time I heard, the Pips was making up with her cricket boyfriend, Alex Loudon… though I haven’t seen pics of them in a LONG time and his family hates her. That’s a point for Harry and Pippa there. Lord knows, Camilla Parker-Bowles can’t be throwing no stones! And then Prince Harry is supposed to be booty-calling Cressida Bonas. But we found out he wasn’t serious with that blond blue blood because he knows he’ll be deployed soon. Again, point for Pippa. Harry probably only let that story fly because Cressida was getting all clingy. So what do we believe?!!

If we’re smart – none of it. But I’ve never been one to let my intelligence get in the way. Pippa and I could be best friends, I’m telling you! So let’s make this a gossip buffet and pick and choose what makes us happiest. Do you think Pippa would go on a date with Harry even while working things out with Alex? Of course she would! They both know about each other’s unappetizing brushes with scandal. All the cards are on the table. There’s nothing to scare the other away!

And both have really grown up over the last year. They’ve settled down and are looking for something. I wouldn’t be able to contain myself if they actually hooked up. How much goodness can one person take? It would be the ultimate coup for the Pips. She’d be a princess like her sis and have so much less responsibility. Can you imagine the stories that would leak out of those castles? It’s a gossip lover’s dream!

However, like I said, I can’t let myself fall for this. It would break me when I found out it wasn’t true. But if I had three wishes, my first would naturally be to ask for more wishes, but my second would be for this to be true. It’s totally believable right? Pippa has a lot of the qualities Harry likes. She’s feisty. She’s fun. She likes to dance in her bra while putting back a few. But she’s not blond… that could be a problem. Not sure if it’s a dealbreaker with Harry but the man does have his tastes. Maybe Pippa’s the right kind of pepper to spice things up for Harry? She’s the only one who could come close to filling Chelsy Davy’s shoes! I have no idea how I’m going to sleep tonight….

What do you think about Prince Harry and Pippa dating? Is it too good to be true? Be honest, how much of you really wants this happen? But are two Middletons at Kensington one too many for those Brits to take?