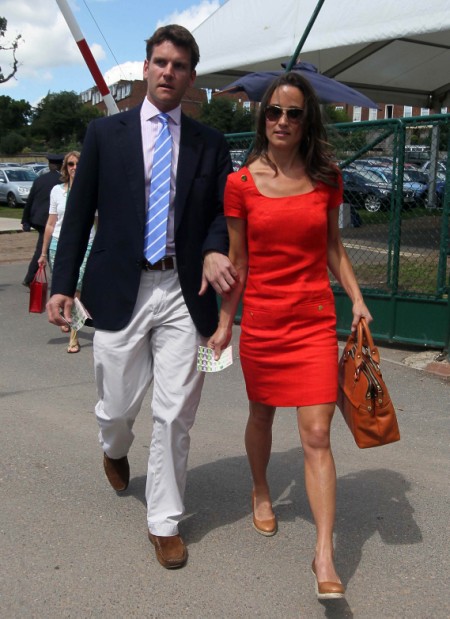 Pippa Middleton’s been spotted sneaking out the back door of ex-boyfriend, Alex Loudon’s house early in the morning leading some to believe that the pair are ready to start over yet again.

Pippa dated Alex for a couple years and even invited him to Kate Middleton and Prince William’s royal wedding before they broke it off eight months ago. It was rumored that the former British cricketer’s parents didn’t think Pippa was marriage material and he became overwhelmed by her instant celebrity. Maybe he’s noticing she hasn’t really done ANYTHING since the wedding (besides the gun scandal that wasn’t even her fault) and is willing to give Pippa another shot at love.

“Of course it is early days but Pippa’s mum and dad Carole and Mike are happy as long as she is,” a source told the Daily Mail. “They always liked Alex and like any parents all they want is for their daughter to be happy.”

Perhaps Pippa’s finally taking her big sister’s advice and snagging a man or maybe George Percy wasn’t about making her a duchess. I like to believe Pippa finally relaxed after her butt got out of all the papers and is reevaluating what’s important to her. Can you imagine becoming a phenomenon over night at the age of 27? But she couldn’t do anything about it. Her parents and her sister harped on her to behave herself. That had to be so hard because at that age you want success and exposure. In a time where everyone wants to be famous, she was handed it on a silver platter and she had to say no thank you. She had to contain herself. Do you have any idea how hard self control is at 27? It’s freaking hard. It’s not surprising she and Alex had problems. How do you deal with that? Yes, she’s had some hiccups, but she’s paid for them.

The pic above is Pippa with Alex at Wimbledon last night. She already made an appearance with her brother to watch Andy Murray play last week. She’ll go again for sure. Please bring Alex. Please bring Alex. He’s hot and rich. So he’s not a duke. Who cares? He’s hotter than William and has all his hair. Come on, give her something over her future Queen sister!

Do you think the third time is the charm for these two or does Pippa just go back to Alex until a bigger, better fish comes along?