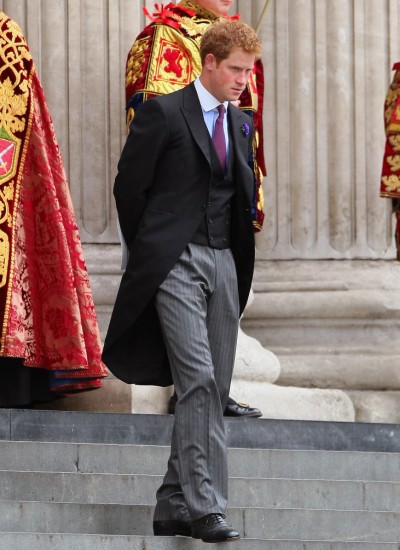 It’s safe to say Prince Harry’s love life is every dude’s fantasy. He can have any girl he wants. Admit it. You’d totally hook up with the ginger Casanova. He’s cute. He’s hot. He’s the perfect mix of the gentleman and the rascal – light on the gentleman, heavy on the rascal. The only problem is that he’s an army boy. And after learning the hard way with ex-girlfriend Chelsy Davy, he’s saving his heart until after his next tour of duty is over.

Yep, calm your quivering bosoms ladies. Prince Harry’s just saying no to love until he’s done soldiering so he can protect his future princess’ feelings. He’s an officer and a gentleman!

According to The Express, Harry is keeping it casual with the bevy of blond beauties he’s been seen around town with in recent months (Cressida Bonas most recently) because he saw what his last tour of duty did to Chelsy and he doesn’t want to put another girlfriend through the same hassle and heartache.

“I think Harry has learned from that and would not want to put anyone else – or indeed himself – through that worry again,” a source told the newspaper. “Who knows in matters of the heart what will happen, but at this stage Harry wants to be deployed without ties.”

I’m OK with this. I knew he wasn’t taking Cressida seriously. For starters, she’s not Chelsy, and secondly, she’s too girl for right now – not the right girl forever. But, we shouldn’t just take this information and say thank you sir may I have another. Harry and Prince William use the same PR people. Is Harry spinning us a yarn just like William? Has good ‘ole dad, Prince Charles, been harping on Harry for his busy nights spent attending music festivals and puking on girl’s shoes? This story reminds us that Harry is a romantic. Harry is serious about his job. Harry wants to settle down but needs to tap all the blond ass in London to console himself because he must put his duty to country over his duty to his heart. And I’m totally OK it! Harry’s the Teflon Don of the royal family. He can do no wrong!

On the other hand, his decision is smart and considerate. I did read that his last deployment was horrible for Chelsy. She couldn’t tell any of her friends and family where he was and she basically worried the entire time. That’s got to be difficult. But she stuck it out and didn’t betray him. That’s what makes Chelsy so special. She’s never betrayed him. She’s never talked. And they will get back together. I’m telling you. Just wait for it. He always goes back to Chelsy after he’s been out of the country for awhile. He did it last year when he was in American on army business and he’ll do it again this time. As much as Harry likes to tell us he wants to settle down and find the one, Chelsy knows different. She’s letting him sow his wild oats a little longer. With Kate Middleton’s help, he’s growing up and maturing but he needs more time. Let’s let him get this new deployment over with and reconvene later because Chelsy and Harry’s love affair isn’t over yet!

Do you think this story is just more PR spinning or is Harry really being considerate for his next girlfriend’s feelings? Also, do you think Cressida stands a chance to Chelsy’s memory? You know where I stand but I’m totally biased. I love that feisty Zimbabwean!