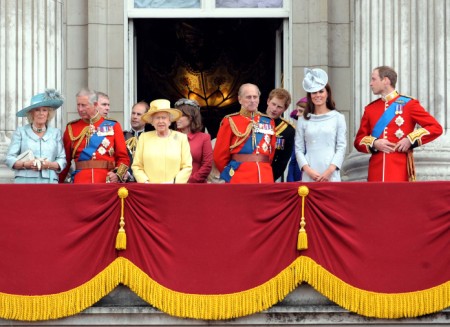 Prince Harry looked his usual charming and jovial self as he waved to the thousands who lined up to see him and his royal family on the Buckingham Palace balcony yesterday, but only hours before, he partied so hard he puked in front of a lucky line of ladies at a popular night club.

Yes, according to The Mirror, lucky clubbers witnessed Harry’s princely faux pas while he was out drinking with his cousin Princess Eugenie at the exclusive Arts Club in Mayfair until 2 a.m. One spectator spilled the details on Facebook and wrote, “Harry being a bit naughty and just been sick in front of the girls loo!” And another hilariously responded, “Yes. I stood in it!”

What a prick move, Harry! Waiting in line for the bathroom at a club is bad enough, standing in puke (even a prince’s puke) makes it infinitely worse!

But you couldn’t tell he was a little worse for wear when he rode around in the carriage with Kate Middleton or chatted her up on the balcony, could you? Was he still drunk? If he was, it was bad timing. The royals were in front of their people YET AGAIN as they celebrated the Queen’s birthday at the Trooping the Color parade. Is anyone else tired of the Windsors waving on balconies? We have a whole summer left of this! Can you believe I’m kind of tired of it? I am… but only a little!

I made a big deal of the fact that Harry and Kate haven’t been photographed together much after they giggled and whispered away their last balcony appearance. I figured they had a royal smack down to cut out the flirting. Either they didn’t listen or the conversation never happened because they were at it again. At one point, Harry even leaned over step-mother Camilla Duchess of Cornwall in order to get closer to Kate. And she leaned in to him! I can’t understand why since I bet his breath was rank.

I think Harry gets away with a lot, don’t you? He’s the lovable scamp that can’t bother to comb his hair for his brother’s wedding but you don’t really want him to change because he’s harmless and makes everything so much more fun!

But do the royals go easy on Harry? Is there a double standard in place because Kate gets crucified if she fondles her hair too much and people just laugh when Harry forgets to shower?