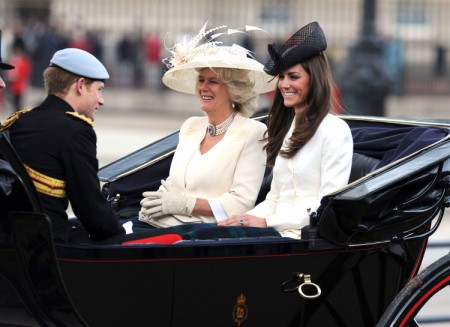 Prince William freaked out at Kate Middleton for her incessant flirting with Prince Harry while the whole world was watching and the two got into a bitter fight over the embarrassment she caused him.

Kate and Harry took center stage during the Queen’s jubilee celebrations last week with constant giggling and whispering and Prince William was jealous and embarrassed by the spectacle. Much has been made of the in-law’s “special relationship” but, surprisingly, Kate isn’t taking William’s criticisms sitting down. In Touch Weekly, print edition, reports:

On June 5, following the Queen’s Diamond Jubilee celebration, Prince William reprimanded his wife for what he thought was “painfully embarrassing” inappropriate behavior between Kate and Harry!

Harry and Kate were particularly cozy during the royal balcony appearance, while William stood formal and rigid in contrast.

“Having Harry there, whome she adores, relaxes her, because he makes jokes as a way to get through the day. She gets the giggles and forgets the world is watching her,” an insider tells Star. “But William told Kate is was flirting and that it wasn’t appropriate.”

Kate didn’t take his complaints sitting down, insisting that he was being “incredibly unfair” – which caused a blowup. “In Kate’s mind, for William to suggest that was was absurb… in the past, Kate would have agreed with William and apologized, but instead she fired right back at him and that took him by surprise.”

Insiders say that Kate’s affections for her brother-in-law are strictly platonic and she was absolutely not flirting with Harry – she was just talking to him as her friend.

Back in May, during a polo match, something similar happened too: “Harry was complaining about how hung over he was, and Kate was saying, ‘Oh you poor darling!’ and making a fuss over him. They were huddling together, whispering, just like they did at the Jubilee.”

Meanwhile, William is at a loss at to why Kate and Harry find life in the spotlight so daunting.

“William has been trained to be King his whole life, so he can’t relate to their feelings. Wills always wanted Kate to be more confident at these big royal events. But now she’s so relaxed that she isn’t mindful of how William views her behavior.”

OK, so much to talk about here. You knew this article was coming. The proof was in the pictures. First came the obligatory “Harry and Kate have a special relationship” sweet stories trying to downplay the bedroom eyes and now we have the “Kate and Harry are knocking boots” stories. Fine. She should have known better. Kate reads the papers voraciously and is very in tune with her position in the media. She should have known her body language would get misconstrued.

And did you see any pictures of Kate and Harry at William’s cousin’s wedding over the weekend? He was there along with Kate and Wills with no date. I didn’t see any. Interesting…. EVERYONE had a royal talking to after that balcony scene.

I have no doubt Harry’s a blast to hang out with at royal functions. He’s the guy you stand next to when you want to unwind and talk shit about other people without feeling embarrassed or self conscious. I’m sure Wills is a rock for Kate, but he’s also unyielding in his royal duties and expects a lot from her. Heavy is the head that wears the crown and all that jazz. Kate uses Harry to blow off steam.

But I think the most interesting part of this story isn’t that Wills yelled at Kate. I’m sure he yells at her a lot – he’s royal and used to getting what he wants after all. What’s interesting is that she yelled back. Waity Katie didn’t wait it out all those years and eventually get that ring by yelling back. I’m sensing there’s some fire and confidence building in Mrs. Cambridge and William isn’t sure how to deal with it.

Let’s face it. Kate’s the draw. People line up to see her – not William. Is history repeating itself? Is William getting overly sensitive like his father did with Prince Diana? I’ve always thought he had more confidence than his father, but it might be receding along with his hair line. Kate has always been cognizant of letting William lead – especially in public. He’s the future king. She needs to placate him. She doesn’t want history to repeat itself either with all the cheating and eventual divorce. So she might yell every once in awhile, but it won’t be an every day thing. Kate’s step might be getting a little bit surer in those nude L.K. Bennett shoes but she still treads lightly. William’s in charge and it will stay that way – trust.

Do you think everyone’s overreacting over the Kate and Harry situation or should she know by now that she can’t keep flirting with her playboy brother-in-law however innocent it may be?