Kate Middleton And Prince Harry’s “Special Relationship” Getting Too Special 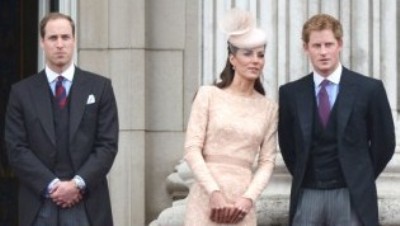 If you’re like me, and scoured every British news source for up-to-date Royal Jubilee celebration information and pics, then you probably noticed Kate Middleton and Prince Harry’s chummy relationship take center stage throughout the events yesterday. They were giggling on the balcony. They chatted merrily in the carriages. They whispered in church. Is Kate getting too buddy buddy with the ginger Casanova?

I read through a lot of comment sections on a few sites throughout the day and was astonished that I wasn’t the only one reading into the body language. A lot of people thought the relationship was a little much, though some just thought it was simple sibling banter. One woman wrote something like, “I never look at my brother-in-law that way” and I stopped and thought well how does that woman know what she looks like when she talks to her brother-in-law? And then, naturally, thought about how I look at my brother-in-law (who I’ve known since I was 11 and am incredibly close with) and I would NEVER look at him that way either. But he’s not as cute as Harry!

The UK’s Mirror even had a story on Kate and Harry’s “special relationship” this morning saying that Kate and Harry were a trending topic on Twitter and that the couple “melted the hearts” of viewers. The Mirror posted a couple tweets including: “Haha Kate abandoned William on the balcony and was with Harry!” and “Kate and Harry’s relationship is so cute, like a proper brother and sister.” I mean, it did seem like that, right?

I’m just wondering if you think the relationship is a little too playful? I’m not suggesting anything sexual WHATSOEVER. I’m just asking if you think it’s appropriate. I think it’s cute but sometimes… I think she smiles a little too broadly. Don’t get me wrong. Harry could probably charm the pants right off of me but Kate should temper those eyes of hers. I know she likes to smile from ear to ear during royal occasions but she doesn’t always have to think someone is taking a picture of her at every second – especially when she’s talking to Harry. Could this be another reason why Chelsy Davy is scared off from being a princess?

I would prefer to stand next to Harry over Prince William any day. William looks like he has a major case of the grumps most of the time and Harry probably has really funny, dirty jokes up his sleeve for church services and the like. He’s the ultimate comrade in arms. I’m just saying… it just looked a little much. Am I wrong? I’m anxious to hear what you all have to say!