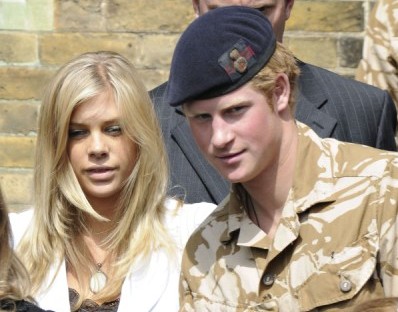 Kate Middleton’s perfection as a royal princess has scared off Chelsy Davy from rekindling her relationship with on-again, off-again boyfriend, Prince Harry. Harry has told Chelsy to make up her mind for good about their status but she remains hesitant to commit to her prince because of the impeccable standard the Duchess of Cambridge has set. Prince Harry even invited the African beauty to Jubilee celebrations in an effort to prove to her how serious he is about their romance but Chelsy has shied away from the limelight.

Ever since attending the royal wedding last year as Harry’s plus one, Chelsy has cooled her relationship with the ginger-haired rascal. But recent sightings of the couple loved-up at a music festival in the Berkshires led many to believe Chelsy was ready to give royal life a chance. The sometimes immature prince, who once got caught wearing Nazi propaganda to a costume party, has grown up over the last couple years and is ready to settle down. “Harry’s never been able to move on from Chelsy no matter how hard he’s tried,” said the insider. “Although things are moving in the right direction he still feels that Chelsy’s holding back, which is frustrating for him.”

It seems beyond belief that Chelsy would hold herself back from a life with Harry even with the intimidating juggernaut that is Kate Middleton hogging all the spotlight. But I think that’s why I respect Chelsy so much and want her to end up with Harry. She has her own money, her own career and her own life and at 26 isn’t ready to give all that up for a future of shaking hands and kissing babies. I’m not downplaying the royal duties but Chelsy wants to get shit faced and chain smoke cigarettes a little while longer without the paparazzi headlining her an alcoholic or a disgrace to the Monarchy. Kate’s been crazy perfect and that unbelievable self control of hers has taken its toll on her throughout this past year. Beneath that picture perfect smile, heavy-handed bronzer and nonexistent waistline she can appear tired and tightly wound.  I can see how Kate’s lifestyle would scare the hell out of Chelsy.

But I don’t think Chelsy understands that the British people don’t want another Kate. She’s perfect for her role. But they would completely accept her as Harry’s love and free-spirited partner. And Chelsy might resent Kate’s aptitude for the royal life but she should take into consideration that the calming influence of William and Kate’s marriage might have prompted Harry to relinquish his party boy ways and want to settle down in the first place. Sure, Kate’s perfection is probably annoying as all hell to Chelsy but maybe it’s rubbed off on Harry a little and Chelsy would benefit from that.

Do you think Chelsy’s just stringing Harry along because she likes having a prince in love with her or do you think her reticence over Kate’s popularity is valid?