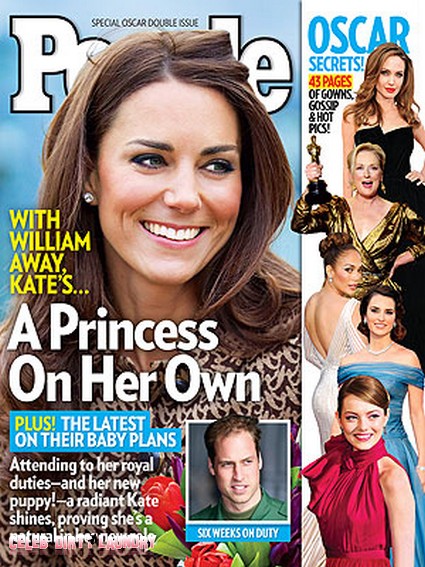 The March 12th, 2012 issue of People Magazine features the cover story, ‘With William Away, Kate’s..A Princess On Her Own.’  The magazine reports that since Prince William is away on a 6-week Falkland Islands helicopter pilot tour of duty Kate Middleton is on her own attending to her Royal duties and her new puppy.  The go on to claim that Kate is a natural for the job and she looks radiant and shines.  They also claim they have the scoop on their latest baby plans.

People Magazine has the scoop: Kate is confidently stepping out solo into the royal spotlight, and impressing royal insiders and commoners alike with her grace and charm.  The magazine steps inside Kate’s world, chatting with people who’ve met her during her six recent royal engagements at charities of her choice. All were moved by the Duchess of Cambridge’s friendly and warm manner.  “We were a bit nervous,” parent Diane Squire said after Kate met her daughter, 12-year-old Megan, who has cancer, at a Liverpool hospital. “But she was lovely.”

Kate Middleton is a woman on a journey – a royal journey – and one for which see seems amply qualified.  Also included in this week’s issue which is a special Oscar issue –  they have Oscar secrets, yay, do tell and 43 pages of gossip, gowns and hot pictures.

To find out all the details of Kate’s time alone without Prince William and a whole lot more, pick up the current issue of People Magazine on stands Friday.