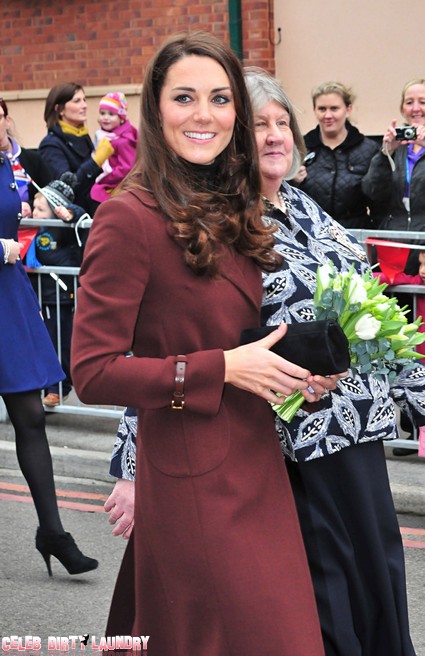 Kate Middleton faces a daunting task in satisfying her royal engagements while her husband, Prince William, completes his 6-week Falkland Islands helicopter pilot tour of duty.  This period includes several official appearances for Catherine, Duchess of Cambridge, and so far she is doing a great job. Kate went through special training to help her prepare for her solo duties before William departed, including some with Queen Elizabeth II herself.

Kate made her first major solo appearance February 8 at the National Portrait Gallery, where she was given a preview of the upcoming Lucian Freud exhibition. According to all sources she was both stunning and gracious – definitely a successful debut.

Next came Kate’s first married Valentine’s Day but she had to bear it without her prince. Kate was in Liverpool on Valentine’s Day for a solo tour of some of the city’s charities including a hospital for children. Kate also visited an alcohol-free bar run by the Action on Addiction charity, of which she is patron.

MORE: Kate Middelton Is All Alone Without Prince William For Valentine’s Day

Kate’s upcoming itinerary is laid out nicely in the The Vancouver Sun:

• March 1: Queen Elizabeth II, William’s grandmother who is celebrating 60 years on the throne this year, will be joined by Catherine and her stepmother-in-law, Camilla, Duchess of Cornwall, when the current and future queens take tea at the opening of a new restaurant in the venerable luxury department store Fortnum & Mason. They are scheduled to unveil a plaque at the London landmark, famous for its cavernous food hall, commemorating efforts to renovate the heretofore rundown Piccadilly Circus shopping district.

• March 8: The duchess will travel to the English city of Leicester with the queen and her husband, Prince Philip, for one of the first of the national celebrations marking the queen’s Diamond Jubilee.

• Later this year: She and Prince William will represent the queen at Diamond Jubilee celebrations in Singapore, Malaysia and the South Pacific.

Kate Middleton is a woman on a journey – a royal journey – and one for which see seems amply qualified.