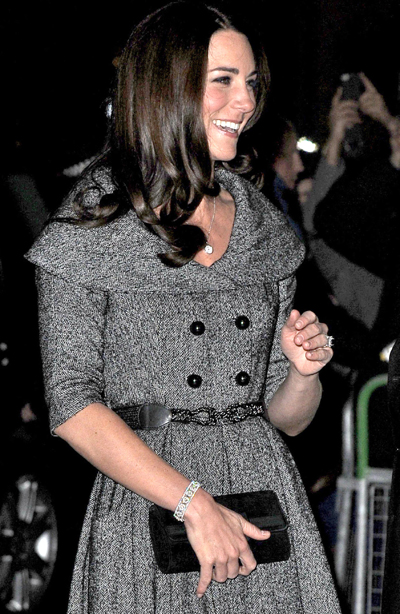 As we previously reported, while Prince William is deployed to the Falkland Islands, Duchess Kate Middleton is to spend the six weeks of his absence, visiting the charities she recently became a patron of. (That is, when she’s not shopping and getting hair done!)

This week, Kate made her first major solo appearance at the National Portrait Gallery, where she was given a preview of the upcoming Lucian Freud exhibition.

The Duchess wore a 1950s style, coat dress by Jesire that featured a wide collar and a belt to show off her tiny waist. She accessorized her outfit with a diamond bracelet and black Jimmy Choo heels.

According to the London Evening Standard, Kate may visit the gallery again later this year to see her own portrait! Reportedly, it is a tradition for all new royal brides to pose for a formal portrait, but, only recently did the 30-year-old, who wed Prince William last April, consent to have one done.

“It’s very early days, but we’ve started a discussion. It will be at least the summer before there’s anything concrete and we can start to look for an artist,” said the gallery’s director to the newspaper.

Kate’s lack of a portrait is not the only tradition the newly minted royal may be breaking either. While most royal brides in the past have been pregnant within their first year of marriage, palace sources speculate that the couple may wait until 2013 before starting their family.