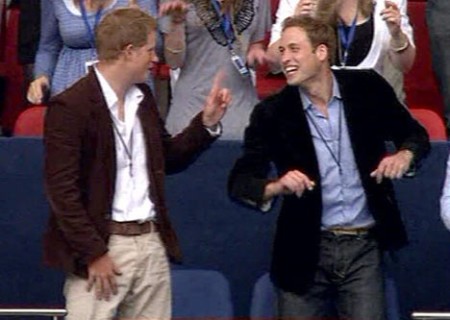 Kate Middleton reveals that Prince William is brushing up on his dance moves and channeling his inner Maksim Chmerkovskiy for an upcoming tour of the Solomon Islands. The islands are somewhere over by Papua New Guinea and the couple are going there in place of the Queen for her Diamond Jubilee celebrations.

According to itv.com, William and Kate announced this eagerly anticipated feat when they talked to the Governor General of the Solomon Islands Sir Frank Kabui and Lady Kabui today. William said, “We’re extremely excited. Both of us have never been anywhere near there.” And Kate followed up with a cute jab, “William’s been practicing his dance moves.”

Oh, this will be fun to watch! William’s famous left feet can only be rivaled by Daniel Day-Lewis’ and he was at least playing a mentally handicapped person. You’ve seen the video right? You have to check it out below. I can watch it over and over again. We got to see William’s stellar dance moves front and center during the Concert for Diana in 2007. There’s a lot of pelvic thrusting and hip swiveling going on there. Ladies of the Solomon Islands, watch out!

Perhaps William’s inner Tiny Dancer is also in response to some sibling rivalry with Prince Harry. Watch the video again and try to tear your eyes away from William’s dainty hips. Harry can dance and even he’s too embarrassed to stand next to his brother. He showed off all his right moves (and probably left some sons and daughters) during his recent tour in Jamaica. Harry even wore blue suede shoes! I’ve attached a video of the ginger prince eye f-cking a girl on the dance floor. It’s too much! Charisma oozes out of every pore.

It’s a dance off! Which brother do you think has the better moves? Can any amount of dancing practice help William come out on top over Harry?