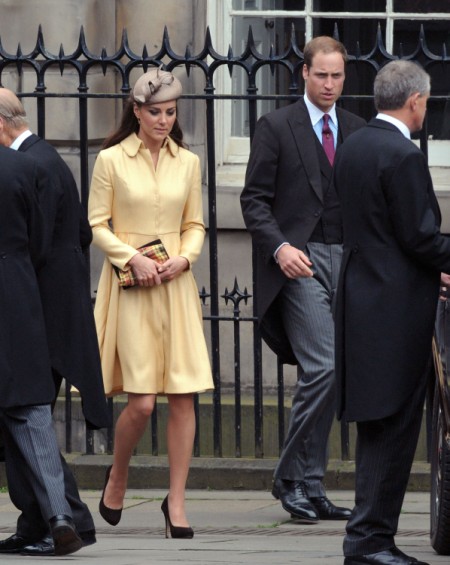 A lot of you noticed that Prince William was absent from the Olympic Closing Ceremonies last night. Everyone knew in advance he had to go back to work in Wales where he plays with helicopters. Kate Middleton was NOT Prince Harry’s date. They didn’t even arrive together. He made the rather awkward walk to his seat with the whole arena watching since he was the seniorest (most senior?) royal in attendance. The look on his face was priceless! You knew he was thinking “Damn you William. You should be here not playing with your stupid helicopters!” Well, I think a lot of the royal family are thinking those exact words right about now as news gets out that William is looking for a way to keep his job with the Royal Air Force in addition to upping his royal work in the coming year.

The heir to the heir has made it clear that when his tour of duty ends next year he will decide on whether to throw himself into public life or stay in Wales with Kate where she can be bored as hell shopping at the local Tesco while gossiping with Pippa on the phone when she’s not making her jams and sausages. We all agree Kate would rather not have this option, right?

Over the last few months, William has said everything he was supposed to to calm down the family and the public. He said he couldn’t wait to start a family with Kate. He said he understood his responsibilities, blah, blah, blah, so we all assumed he would put his toys away and start cutting more ribbons and making ‘dem babies with Kate. However, The Telegraph explains that William is looking for a way out! Like the King he will one day be, he wants to have his cake and eat it it too!

Mandrake understands that military officials are working on a plan that could enable William to satisfy all the demands on his time. “One serious option is for the Duke to become a flying instructor,” says a senior RAF officer. “As long as his flying reports are good enough, he could train helicopter pilots. This would keep his flying time up and give him more flexibility for royal duties.”

The source says the RAF would have reservations about the Duke giving up his post completely. “It could cause a problem with officers who want to leave early,” he says. “At the moment, officers have to serve a six-year tour of duty and we don’t want others to demand the same treatment.”

I think the Queen is too lenient with William. Her crown was thrust upon her at a young age after her father prematurely died so I’m sure she wants William to experience the normal life that she never could but this has got to be annoying the hell out of her –  and Prince Phillip especially. Those two are OLD. Poor Phillip looks like he has daily chats with the grim reaper but homeboy makes it work and does every function he can. He’s a trooper! Same goes for Liz. They’re ready to relinquish some of their responsibilities and William and Kate are prime to take over with the help of Prince Charles and Camilla Parker-Bowles (but who cares about them?).

Let’s call a spade a spade. William is selfish. And I love William. I’ve loved him ever since I bought my first William calender when I was 12 and I stared at the photo of him at the river in Scotland with his dad for months without flipping the page. You know the one? Of course you do! He was wearing these amazing green jeans and a plaid blue and white shirt. He was beautiful. And charming. He still can be! The Olympics gave me hope. Kate and William were in to each other – hard core. When he’s on – he’s on. And he lights Kate up as well which is why I think she was so laid back these last two weeks. The second he gives her an ounce of undivided attention, she truly glows and eats that sh-t up like it’s Sunday dinner. She basks in his attention. But then there’s the other side of William, the crotchity, “I don’t feel like playing along” William, the sulky William, and you can also see that on Kate’s face as plain as day. That’s when the lips purse. That’s when Kate looks 10 years older. That’s the no fun Kate.

So how do we reconcile the two Williams? Luckily, we don’t have to. Mr. Mercurial is Kate’s problem (any Fifty Shades of Grey readers out there today?). But still… less William means less Kate and I can’t be having that noise. I need my Kate fix.

But then I looked at the article again. It could just be a PR slant. Everyone knows William’s going to leave the RAF so this is just a way to convince the people yet again he’s a normal dude who wants a normal life like them and is being pulled from the tight chains of the monarchy and forced to rule over them. A reluctant king and queen? Oh yes, a very modern twist indeed. But that’s what Kate and Wills are spinning. Kate won’t be a clothes horse. Kate won’t get knocked up right away. Kate and William will live in Wales for awhile because it’s so happening. And Kate just smiles and nods because she loves him and is just happy to be along for the ride. There are worse things.

So what do you think? Is this a PR move by William’s people or is he really that reluctant to join his father for full-time royalness? If you believe he’s unwilling do you think he’s being selfish considering the age of his grandparents or do you blame his dad for coddling him? Also, is Kate getting the raw end of the deal here? We all know she’d rather be shopping with the Pips in London. Do you think she basically does whatever he says? Sometimes I get that feeling….