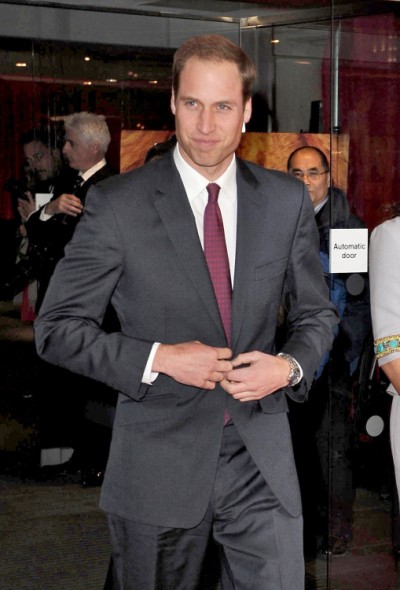 Prince William recently opened up about his ever evolving relationship with his grandmother and Queen and his continual reticence of one day becoming King.

Kate Middleton’s husband spoke to TV host, Alan Titchmarsh in Elizabeth: Queen, Wife, Mother, airing in the U.K. June 1. He had lovely things to say about his grandmother who is celebrating her Diamond Jubilee this year. “We’re definitely a lot closer than we used to be. I think being a small boy it’s very daunting seeing the Queen around and not really quite knowing what to talk about or what to ask her. I think over the years that’s got a lot better. I’ve grown up — hopefully — a little bit and tried to understand a bit more about her role and my own role.”

Hell, my grandma scared the shit out of me and there wasn’t nothing royal or english about that big, hulking German woman (sorry, grandma, love you!). So I empathize with William here. I don’t see the Queen or Prince Phillip trying to get a young William to pull their finger, if you get my drift.

But then he goes on about his destiny and it’s all, “Heavy is the head that wears the crown” bullshit. “There’s not much wriggle room left for me to try and find my own path, but I will do. It’s just a matter of learning what’s gone before me. Everyone’s fascinated by the Queen’s life and how she’s done it. And I would just hope that a bit of what she’s done and a bit of what she’s achieved, and a bit of how she’s conducted herself, we all take away in our own lives and try and do it ourselves. I would like to take all of her experiences, all of her knowledge and put it in a small box and to be able to constantly refer to it.”

I am sick and tired of William whining about being a prince! I’m sorry, send the hate emails my way but I can’t help it! Oh, the press killed my mother! Oh, all I want to do is fly my helicopter! Oh, the media is bullying my wife! Oh, I don’t want photographers taking my photo at university!

Yes, you have responsibilities that you might not be too keen on, but I hate ironing my husband’s dress shirts, so we all have to do things in life we hate. But I don’t get free drinks in night clubs or get to travel all over the world or get to take a zillion vacations a year like you. Suck it up! Do you think the Queen would have made those comments when she succeeded to the thrown at age 25 after her father unexpectedly died? Hells no! Because Elizabeth was a baller and more of a man than the “woe is me” Windsor dudes she helped create.

If it makes you feel any better Wills, you’ve got a while before you have to rule – a long while. And it’s not like you’re following Elizabeth. You’re following Prince Charles! Your job is fool proof. It’s like President Obama coming in after President Bush. After years of Charles and Camilla’s awkward humor and horrid fashion sense, the British are going to be falling over themselves to bow to you and your hot wife. Everyone (myself included) will be eating out of your hands.

Now, you might think I’m reading too much in to what he said. He did say he would try find his own path so I’ll let this go for now. But damnit, I woke up at 3 a.m. to watch his gorgeous ass get married last year. I want him to appreciate that!