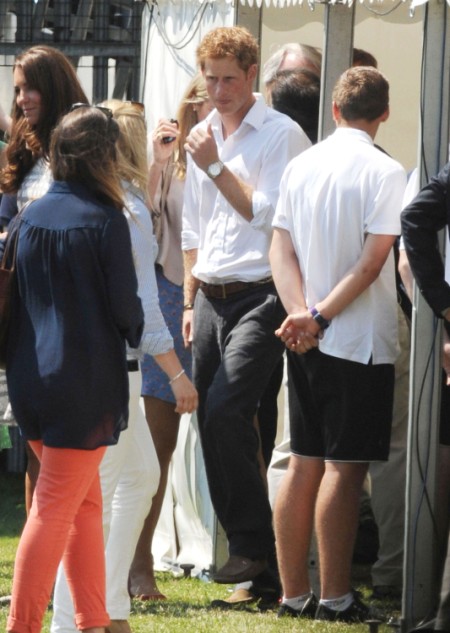 It looks like Prince Harry is growing on English model, Cressida Bonas, because the two left the Olympics in their rear view mirror and attended a music festival in the south west of England over the weekend.

The prince was spotted at WOMAD with Cressida and, according to the Wiltshire Times, the socialite who said the third in line to the crown wasn’t her type appeared “quite captivated.” Harry was up to his usual fun-loving antics and amused his group of friends – which included Princess Eugenie and her boyfriend Jack Brooksbank – by wearing a duck-shaped hat.

Prince Harry is a familiar face on the music festival scene. He was spotted with ex-girlfriend, Chelsy Davy, at one earlier this summer sparking rumors that two had rekindled their relationship. “He (Prince Harry) was in every bar, and he was seen playing table tennis in the backstage bar at one point,” festival director, Chris Smith, told the newspaper. “One of the crew challenged him to a game but he declined unfortunately. He has been for the last three or four years and I think it’s really nice that he is a young man who can come and just enjoy himself, especially with the pressures he faces sometimes. Hopefully he was able to relax like everyone else.”

I don’t think relaxing is Harry’s problem. I think finding a girlfriend was one but that seems to be a non-issue now as well. I told you Cressida was playing the “Harry’s not my type” card to throw off the media so she and her prince could get it on without the paparazzi following them around. Sigh. I’m not happy about this. I need this girl gone so Chelsy can come back. She will. It’s only a matter of time. Maybe Harry’s only messing around with Cressida to make Chelsy jealous. I’m OK with this. I just don’t want it to last too long. I don’t think it will. Harry’s relationships with girls other than Chelsy rarely do.

Does it bother you that Harry left the Olympics to check out the festival? I could understand if Jay-Z was playing or something but, come on Harry! It’s the Olympics! Beach volleyball is going on right now so I don’t know what was so important about the concert. Unless it was the girl? Is there something about this girl I’m not seeing?