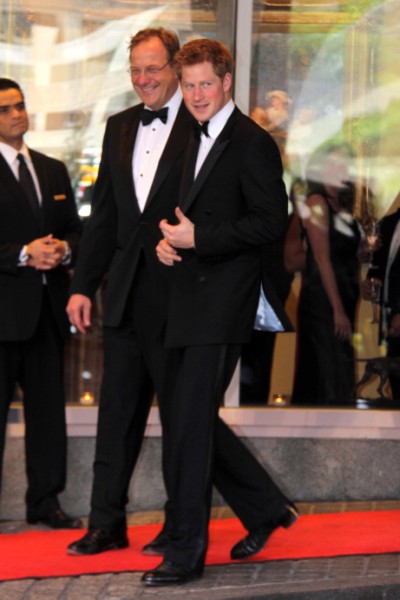 Why doesn’t anyone want to be Prince Harry’s girlfriend? Cressida Bonas, the Burberry model Harry was caught canoodling with after the The Dark Knight Rises premier last week, is laughing off reports that the two are an item and even said, “Harry? He’s not even my type.”

Dear God, why not? The 23-year-old socialite looks like she’s exactly his type bearing a striking resemblance to his on-again/off-again girlfriend, Chelsy Davy. But a friend of Cressida told The Mirror that there’s absolutely nothing going on.

“Any rumours there is more to it just isn’t true – at least for now. Cressida’s shocked there has been such a fuss over all of this. She can’t believe she’s hit the front pages over simply talking to him. Harry’s a flirt but there’s nothing going on with them,” the friend said. “She joked, ‘Harry? He’s not even my type’. She’s heard from him since the news broke and they’re both finding it very funny. Harry definitely wants there to be a romance and has been pursuing her. But she’s playing hard to get. The truth is they’ve known each other for a long time through friends and they party together.”

OK, so it’s not like Cressida is saying no for good, she’s just not giving in that easily. That would probably by my plan as well. You can’t be seen as a sure thing to a dude that gets everything he wants. What’s interesting is that Cressida is half-sister to Isabella Anstruther-Gough-Calthorpe (I know, the names are ridiculous) and she used to be linked to Prince William. In fact, it’s been reported that Isabella is the main reason Will dumped Kate a few times. He was supposed to be infatuated with her and Kate naturally hates her. Isabella never took William seriously because she didn’t want a royal life and is now engaged to Richard Branson’s son, Sam Branson. It’s society musical chairs! So do you think Kate wants Harry bringing that piece around the palace? Hells no she doesn’t! I bet Chelsy’s looking better and better to Kate these days. She should put in a call and get those two back together!

For now Kate will just have to deal with the reminder because I don’t think this hook up is over just yet. Do you believe the friend and think Prince Harry is doomed to stay single forever or is Cressida just feeding the media this story so it will get off her back and they can date in secret peace?