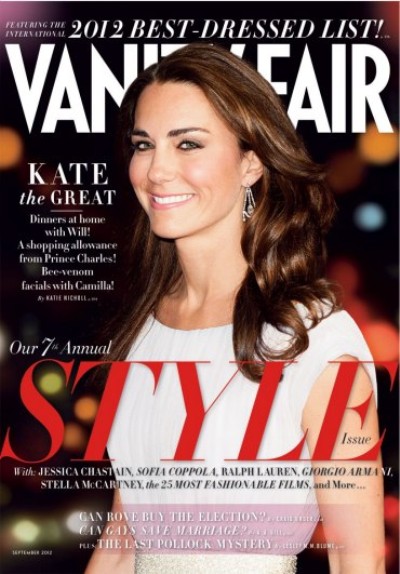 Well, Vanity Fair is officially only one step higher than South Africa’s Marie Claire because it too has decided to paste a pic of Kate Middleton on its cover without having the duchess pose or even bother with an interview. VF is only rated higher than MC in this circumstance because it didn’t get a five-year-old to cut and paste her face on another model, and they actually did score an interview with Katie Nicholl, Daily Mail reporter, and Kate’s go-to insider. The magazine is letting the readers in on a few snippets from the article in its September issue. There isn’t too much stuff we didn’t already know, but since it’s from Nicholl, we can rest assure it’s at least true – although very positively spun.

Here are the better parts:

Despite their lean physiques thanks to deerstalking, tennis, and Buckingham Palace swims, Will and Kate are foodies, and tuck in regularly to homemade roast chicken (Kate does the cooking and shopping, and employs no cook at their home on the Welsh island of Anglesey). They also own a sausage-maker (!) to make their own links, and for the holidays, Kate puts away jars of homemade strawberry jam and plum preserves to dole out as gifts. On the average day off, the pair just potter around, “making tea and toast,” per a family friend who recently swung by to find them living a simple home life on Anglesey.

They splash out for DVD box sets. Right now, the royal couple are obsessed with The Killing, which they recently devoured in a marathon session—and they often stay in to binge on various new series rather than hit up society events.

Kate has a flair for interior design that she hopes to soon show off: as the couple will receive the keys to Apartment 1A at Kensington Palace (“K.P.”) this fall, Kate says that she wants to oversee the decoration of their new flat—with the help of a professional designer and contractors, needed to completely electrically rewire the 20-room residence. The renovation and decoration are estimated to cost $1.5 million, and will be paid for by both the Queen and Prince Charles in anticipation of Kate and Will’s impending life as full-time, London-based royals.

The duchess’s schedule requires up to five clothing changes per day. The rigorous outfit swapping attendant to royal protocol is said to stress out the duchess—not that the stress shows.

And even though the bill for her couture and jewels was printed in the tabloids with raised eyebrows earlier this year—$55,000 for six months of duties—Kate defrays the cost by bargain-shopping. The duchess also continues to decline the services of a royal dresser, preferring to personally shop for herself at chains like Topshop.

See? More of the same. It actually reminds my of those annoying sections in the front of the tabloids “Stars are just like us!” Kate and Prince William like to watch TV! Kate makes jam! Kate finds changing clothes stressful! I can’t rag on her for that. I work from home so changing out of my pajamas seems like a herculean effort most days.

One interesting quote from the article is, “’There’s a happiness in the House of Windsor generally at the moment for the first time ever,’ a royal pal tells Vanity Fair contributor Katie Nicholl in the September issue, part of a cover story on the Duchess of Cambridge’s undisputed status as Windsor crown jewel. ‘Charles and Camilla are genuinely happy. William is happy because Charles is troubled less, and he has Kate to share his future with.'”

First time ever? What does that mean? Are these people generally unhappy with their pots of cash and the open doors wherever they go? What’s there to be unhappy about? These people are such a mystery, right? Like, I could read and write about them every day for the next 50 years (and believe me, I’ll try) but I’ll still know so little about them. Still, it’s an incredibly telling quote. I wrote yesterday that all was not right in the House of Windsor and I might have been more on than off. Kate may be bringing all the smiles and the good moods but her presence hasn’t exactly made it easier for the other senior royals. Should be fun to watch in the future!

What do you think of the Kate Middleton Vanity Fair piece? Are William and Kate just like us or is Katie Nicholl pumping us up with this fluffery in the hopes that we continue to believe Kate and Wills are normal people who deserve privacy?