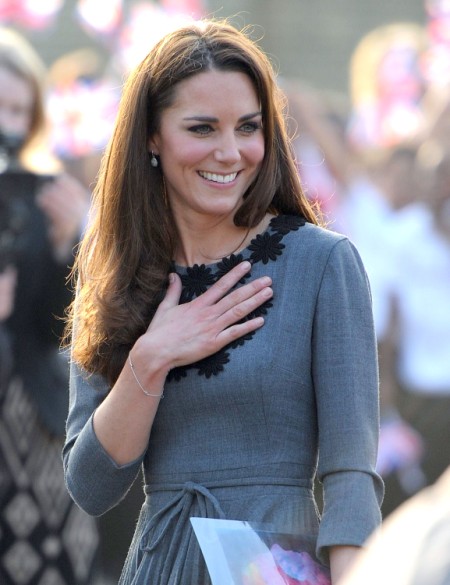 Has Kate Middleton finally caved and agreed to model for her first magazine cover? At first glance it looks like it might be true. The Duchess of Cambridge is front and center in Marie Claire South Africa’s August issue. But if you look just a little bit closer you’ll notice there’s something a little bit off with the glossy picture.

Obviously the magazine has realized that if you put Kate Middleton’s picture on anything it will sell like crazy – even if it’s just her head glued on a model’s body. In the faux shot, Kate is posing all sassy and wearing a flamboyant Clive Rundle design. The headline reads, “Kate Middleton: Fashion’s New Royal Icon wears SA’s Best Local Designs”. But then there’s a tiny asterisk that leads you to the bottom of the cover where in tiny letters it says, “Of course she doesn’t. But she should.” Oh, Marie Claire, you’re so tricky!

If you, even for a second, were fooled by the photo-shopping, the dress should have tipped you off. Kate doesn’t ordinarily rock the tribal prints. But Marie Claire is naturally defending its decision to use Kate’s fake image to sell magazines. According to the Daily Mail, editor Aspasia Karras said, “The cover is actually a hyper-real illustration of Kate, meant to be a fan art tribute to fashion’s new royal icon.”

Do you buy it? This isn’t the first time Kate’s controversially covered a magazine. The most recent example was when The New Republic used a picture of the duchess with teeth altered to look crooked and nasty. But that was more or less Kate and the magazine wasn’t trying to convince readers that those were her real teeth. Despite Marie Claire’s defenses, it is obviously trying to trick people into believing Kate lifted her embargo on giving interviews to magazines. Vogue has been dying to be the first magazine to land Kate but she has sensibly declined, thanks in part to the Queen’s influence.

You can check out the pic below. Admit it. It fooled you for a second! Do you think Marie Claire’s Kate Middleton magazine cover is harmless fun or do you think it’s shameless and deceiving?