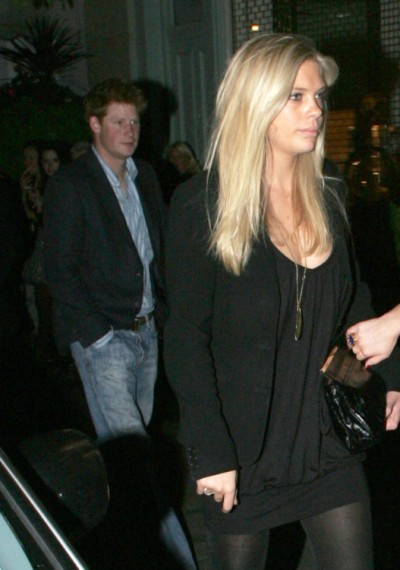 By now we’ve all seen the photos of Prince Harry cupping his royal jewels in a Las Vegas hotel room while, presumably, naked girls stand around filming and laughing over the money about to be made off the playboy prince. It’s easy to call him stupid and childish because he is stupid and childish. But where’s the motivation? There’s got to be more to the story because everyone knows every time a dude strips down to nothing and hugs a pair of fake boobs from behind he’s really crying on the inside.

Tom Sykes at The Daily Beast seems to have cracked the code!

Despite maintaining a relatively sober public image, off camera, there have been hints that Harry’s wild ways have persisted, and his demons have remained unconquered. There have been innumerable late nights, and in June this year, he was sick outside the ladies WC in the Arts Club in Mayfair.

Some of his circle say that although Harry has been publicly appearing to grow up during the past year, it has actually been a time of immense personal turmoil for him, following his split with long-term girlfriend Chelsy Davy after the Royal wedding. Although she was sometimes described as ‘wild’ herself, she was actually a calming, anchoring influence on Harry. Since then there have been a string of passing romances, but nothing approaching a relationship. Dickie Arbiter, former press secretary to the Queen, commented this morning that Prince Harry is ‘a loose cannon and shouldn’t be left alone.’

So this is all the fault of ex-girlfriend Chelsy Davy? Prince Harry can’t cope with the fact that she won’t take him back and has to drown his sorrows in tequila and silicone? He doesn’t look all that put out in the embarrassing photos. But perhaps he’s just good at putting on a show for his sleazy hangers-on. He is Princess Diana’s son after all. If he inherited anything from her besides her millions it must have been her ability to crave attention while suffering inside. But is this the best way to get Chelsy back? She’s made it quite clear that royal life and the glare of the paparazzi is not for her. So why court her with your crack all over Las Vegas? Prince Harry surprised me by not being harrier. I expected more fuzz.

Anyway, I doubt she’ll come running back into his arms anytime soon. He might have just put the nail in the coffin with this latest gaff… unless… unless she views this as a cry for help? Is that reaching too much? Will Chelsy ring him up and b-tch him out on the phone? Will he start crying and ask for help? It’s not that far-fetched. This could be Harry’s rock bottom and you know what they say about rock bottom – you can only go up.

Do you believe Prince Harry’s still reeling from his break up with Chelsy and that’s the real reason he lost his sh-t in Las Vegas or are we making excuses for the ginger Casanova because we like him so much?