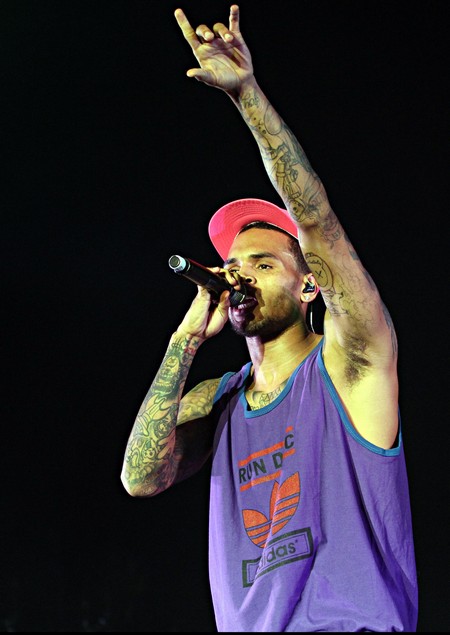 Chris Brown lip-synching!  Chris received insults from Pink and Joe Jonas for his performance during the Billboard Music Awards because he lip-synced the whole song.

Two, one vocally talented and someone who I consider just meh, Pink and Joe Jonas both commented on Chris’s version of “Turn Up the Music” saying that all he did was mime his way through the whole song.

Pink tweeted “One day if I lip-sync I hope I do it as well as him…” as you can tell she was clearly sarcastic. After that tweet she got a ton of Chris Brown fans pissed off and she once again tweeted “Oh my lord, it’s so easy…it’s so damn easy. Keep it coming people, this is some good reading…” Taking it like a good sport and basically telling his fans to f**k off.

Pink’s husband Carey Hart also took part in bashing Chris Brown, tweeting his own opinion on the whole performance. You will see that it wasn’t all that much of a positive review.

Carey wrote “I’m pretty sure I saw my wife did that same performance, but she was 3 months pregnant and actually sang the song,” then added “If any of your guys are riding on Chris Brown performance, please fire them.”

Joe Jonas who is considered as meh (in my opinion) asked “What happened to people singing live???” As much as I hate the guy he’s got a good point. There are a lot of singers who are beginning to take advantage of lip-syncing and it’s not very impressive, people have come to see you live for a reason, to hear you sing and not to watch you lip-sync.

During this whole thing; Pink and Carey against Chris Brown’s performance, it somehow got Katy Perry’s fans known as her Katycats to assume that the criticism was also directed towards her. This is completely stupid since nobody ever mentioned Katy Perry. Although, it was cleared up and the Katycats went back to their cave.

Carey tweeted “To clarify I was talking trash bout CB performance, 2 years ago my wife had the same set and actually sang ‘Raise ur Glass.;”

Then Pink tweeted “For the record; I luv me some Katy, so y’all can jump off that runaway train, k?” Then mentioned “I stand behind, always have and always will, LIVE SINGING.“

Chris Brown hasn’t said anything on the matter which is a good thing, it’s better to just brush it off than to do something stupid. I don’t really hate Chris Brown nor do I like him, all I know is that he’s a very talented person when it comes to dancing and I respect him for that. But when it comes to music, the buying public deserves to have it LIVE.