Christian Bale: Drew Barrymore Dumped Me After One Date

BY Margeaux on May 31, 2012 | Comments: one comment
Related : Celebrities, Christian Bale, Drew Barrymore 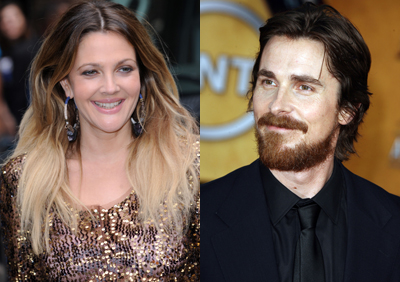 Who even knew that Drew Barrymore and Christian Bale ever dated? Not us.

But it seems that the two, who were both child stars and are only a year apart in age, shared one horrible date when they were teenagers.

The 38-year-old Dark Knight Rises star revealed in a new interview with GQ Australia via the New York Daily News that he took Drew, 37, to see some “bloody awful horror film.”

After that, “she never called again,” he said.

Little did Drew know that she was dumping a future Oscar winner and future Batman! (Surely, she must have regretted not calling Christian again after she saw that shower scene in American Psycho.) Related: Watch Christian Bale And Anne Hathaway In The Trailer For The ‘Dark Knight Rises’

However, while their relationship was short-lived, it seems that everything has worked out for both Christian and Drew in the romance department. Christian has been married to Sibi Blazic, the former assistant to Winona Ryder, since 2000, and the couple has a 7-year-old daughter together. While Drew is currently planning her wedding to art consultant Will Kopelman and expecting her first child.