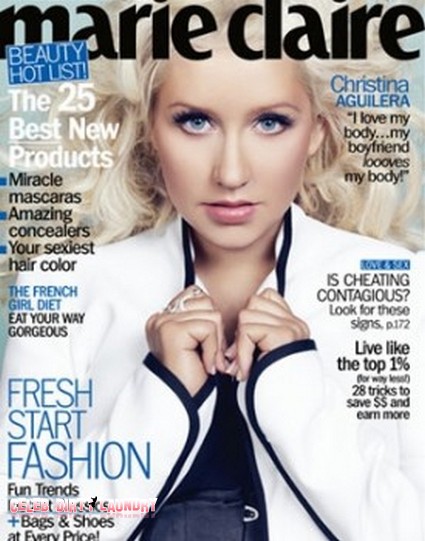 Christina Aguilera has been no stranger to controversy, criticism, and heartache during 2011.  She admitted to the folks at Marie Claire magazine that she’s been through a ‘rough year’, and that she’s looking forward to 2012 with a fresh and positive outlook.

From flubbing the National anthem, and then getting arrested with boyfriend Matthew Rutler for public intoxication – she was faced with a lot of slack.  Her problems begun back in 2010 when her and her husband of 5 years, Jordan Bratman, divorced.  Thankfully, her and Bratman remain on good terms when it comes to raising their 4-year-old son Max.

Christina has also had to unfortunately deal with the harsh remarks with relation to her ‘curvy’ physique.

Well said girl.  In a world that puts so much focus on weight, we need to remember what is most important – family, health, and happiness.

The singer is returning as judge on NBC’s The Voice, where she is committed to bringing confidence to aspiring artists as she mentors them throughout the season.  Her next album, coincidentally, will be about surviving.

“Time heals everything, sometimes you have to go through that pain and heartbreak so that you can get to the other side and come out on top.”

I didn’t know how much I like Christina.  She’s a great person to emulate and look up to for young girls, with a great ‘voice’ – in more ways than one.