Christina Perri: The Voice Behind Bella And Edward’s Twilight Wedding 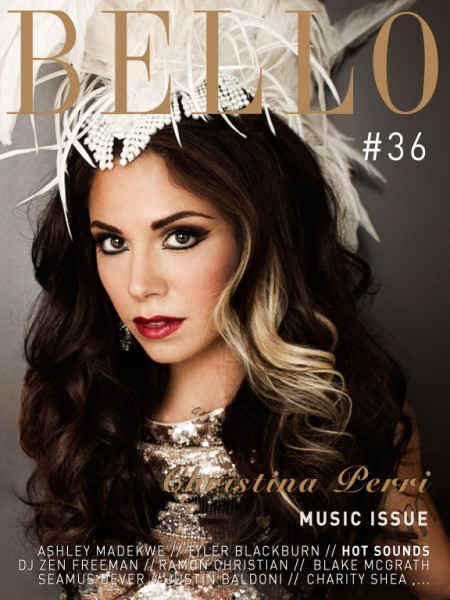 Singer-songwriter, Christina Perri covers BELLO magazine this month and reveals that she’s more than just a two hit wonder. They are a pair of pretty big hits though. Not only did Jar of Hearts catapult the 24-year-old into instant fame, the haunting song went on to sell a million downloads and take the singer out of the cafe where she was struggling to make ends meet and into the offices of Atlantic Records. On her website, the singer says about the experience, “While all of this was happening, I barely slept because I was afraid it was just a dream; that I’d wake up and none of it would be real. One minute I didn’t exist in the music world and the next minute I did.”

Since then, Christina has scored another major coup landing her song, A Thousand Years, on the Twilight Breaking Dawn soundtrack and has also been featured on musical powerhouse, Glee. That’s a far journey for the daughter of hairdressers who grew up in the outskirts of Philadelphia.

Christina looks like a cross between Angelina Jolie and Emma Watson with eyes that encourage a hug but 50 tattoos that warn you to ask first. Her voice and lyrics are just as misleading. She sings of love and loss, betrayal and eternal love, sometimes all in the same song. In addition to racking up fans, she’s also found admiration from her peers and has collaborated with Jason Mraz on her newest album. Yet to be jaded by fame, she cannot control her excitement to the magazine. “I have been a die-hard Jason Mraz fan for 10 whole years now! The collaboration is purely magical and almost seems like a fantasy most days for me. I feel like the luckiest girl in the world. The story of “Distance” is he loved it on my album and had the idea to re-cut it with his vocals making it into a duet. Then we decided to tour together. It’s all lining up pretty perfectly so I get to fulfill a dream of mine every single night this summer.”

Christina is joining Jasons’ Love Is A Four Letter Word tour this summer for its U.S. and Canadian leg solidifying her place in the music world.

I absolutely love A Thousand Years! I listen to it while I run on the treadmill. Is that weird? I don’t need upbeat, fist-pumping songs to run to, just songs I can lose myself in and Christina’s voice definitely has the power to do that to me. I’m anxious to see where she goes from here! How about you?