Clint Eastwood Afraid His Family Will Become Famewhores Like The Kardashians

BY Jeanne Adams on May 18, 2012 | Comments: one comment
Related : Uncategorized 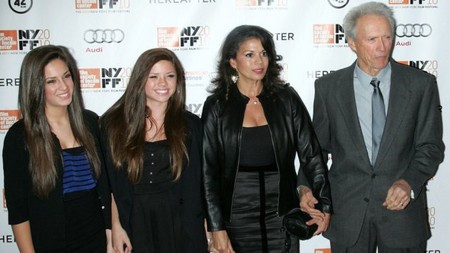 Before Clint Eastwood knows it he will be the next Bruce Jenner living in his own version of Kardashian hell. His wife is not making Clint’s day with the advent of her new reality show, “Mrs. Eastwood and Company”. Is Clint Eastwood going senile? What the hell is he thinking letting his wife have a reality show? Oscar winners don’t play this game!

Initially it was reported the 82-year-old director was against having cameras follow his family around for the sake of his wife, Dina Ruiz’s, thirst for fame, but apparently she got her way and the show can now be seen on E!, the home of Kendra Wilkinson and the Kardashians… such A-list company. I bet Clint would watch the monkey from Every Which Way But Loose play with its sh*t rather than watch those shows.

Clint might have given his wife the OK, or just fell asleep while she was nagging him about it, but Dina tells Star magazine he’s still not totally comfortable with the whole thing.

From Star magazine’s May 28 print edition: Was Clint into doing the show? “He’s not doing cartwheels, but we’ve been married for 16 years. He knew what he was getting into.” Is Clint the next Bruce Jenner? “He appears in episodes because he’s a good husband, but none focus on our marriage. It’s about me being a haggard mom.”

On discovering Overtone (an a capella boy band): “I went to South Africa with Clint for Invictus. I heard them sing, and I’ve been their momager for three years. They’ve lived with us off and on.”

Does she worry about hunky boy singers around her daughters? “These guys are out of the ’50s. They carry grocery bags. They open doors. There’s no sneaking around.”

What does Clint think? “Clint has faith in me and the kids. I’m the sergeant; he’s the lover. He’s like, ‘Oh, let the gals have fun.”

Did he really know what he was getting himself into Dina? Really? Because he’s 82. I’m not ageist or anything but I’ve heard it gets harder to remember things when you’re an octogenarian. Could this be a case of, “But don’t you remember Clint? I told you all about this yesterday.”

It’s obvious Dina wants to make a name for herself and put some fire under her managing career. And she’s said Clint and their marriage isn’t the focus of the show. For her sake, I hope she’s lying. Who the hell wants to see a show about Clint Eastwood’s family without Clint Eastwood? It’s kind of sweet that he’s willing to ruin his legacy for his wife’s happiness but if I were him I would have been all “B*tch please, spend all my money you want, just let me go back to sleep in peace!”