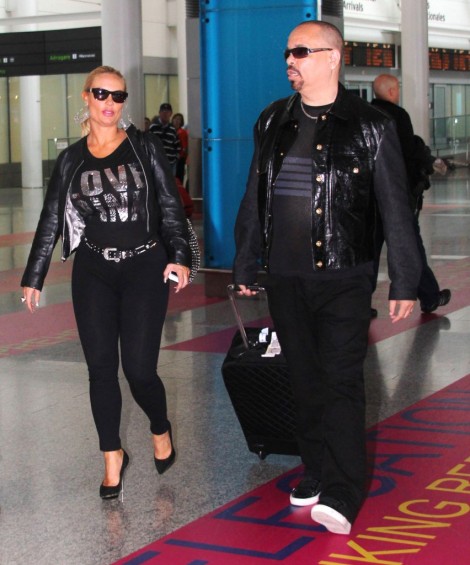 I was just talking about Ice-T and Coco! I went out to dinner with my friends who were adamant about me watching the show. I’ve never seen Ice Loves CoCo but they assured me it was right up my alley. Since I watch anything reality and all things that rot the brain they convinced me to give it a shot but I haven’t gotten around to it yet. Looks like I better get to it fast before it’s pulled because the couple may be dunzo over some suspiciously flirty photos.

Have you ever perused Coco’s twitter pics? They’re actually pretty amazing and gross but mostly just entertaining. She loves flashing that ass and it’s her bread and butter so I give her a pass (I rhymed!). The girl’s made a career off that butt so good for her. Ice-T’s never seemed to have a problem with her self-promotion but Coco may have taken it too far this time.

Ice is apparently furious at his wife for getting too close to rapper AP.9 (can someone tell me how to pronounce that?). Pics surfaced yesterday of the two hanging in Las Vegas looking very chummy. AP.9 was kissing and hugging on her and doing other things you probably shouldn’t do to another man’s wife, let alone Ice-T’s. I’m even a little shocked by them. Ice took to twitter and slammed the pics saying, “Don’t get it twisted, I’m not happy about this s**t. Most of [the pics] are disrespectful and in bad taste. She’s made me look and feel like s**t. I say this on Twitter because there’s no way to avoid the obvious misconduct of a married couple.”

I still don’t understand Ice’s reasoning for blasting his wife on twitter. Couldn’t he have walked to the other room and bitched her out? This reminds me too much of Rob Kardashian’s Rita Ora freak out so I’m embarrassed for Ice now. Never stoop to a Kardashian’s level!

Do the pics look harmless to you? They don’t to me but maybe Coco just likes to make Ice jealous? My friends said Coco isn’t as dumb as she looks but maybe that’s not true?

Do you think Coco cheated? Could something like this lead to a split? Ice-T doesn’t seem like a dude who will tolerate this type of nonsense….