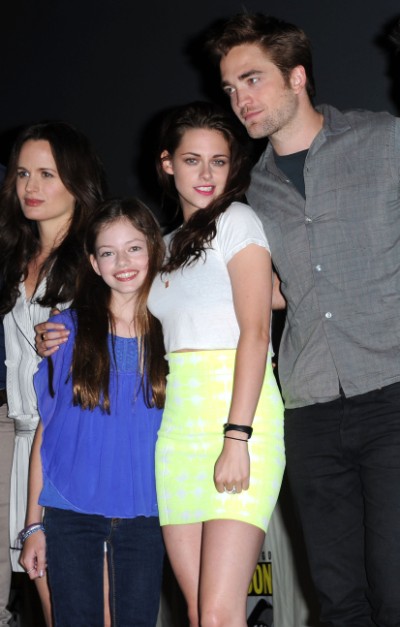 Comic-Con is finishing up its successful long weekend run in San Diego today after hosting some of the hottest actors in Hollywood’s most anticipated movies of the year.

Perhaps two of the most eagerly awaited films – Django Unchained and Oz: The Great and Powerful – hyped up fans with appearances from Jamie Foxx, Mila Kunis and Michelle Williams. Anyone tired of Michelle’s pixie cut and shift dress look yet? She looks cute and all but I’m over it. Anyway, Williams plays the iconic role of Glinda the Good Witch and Mila plays her witchy sister, Theodora. Williams spoke to MTV about taking on the responsibility of the beloved character. “I think I would hope to be inspired by it. Our story pre-figures ‘The Wizard of Oz’ — that’s who my character turns into, that’s her in her most crystallized perfect form. I thought it was an opportunity to see who she might have been when she was younger, when she was at the precipice of her powers and wasn’t fully realized into the Glinda that we know and love from the classic film.”

Kristen Stewart and Robert Pattinson also showed up to perform their last Comic-Con duties for Twilight. The couple vamped it up for the cameras and even got a little raunchy while they answered questions on the panel. What a difference a few years make. Gone were the awkward Kristen and Rob who wouldn’t even admit they knew each other. Kristen looked uber sexy and confident in a bandage dress and crop top and hinted at the X-rated vampire sex in the final installment. “[It’s] a tricky thing. I think … how do you have … because we’re supposed to have mind-boggling, otherworldly … sex. In the first one, Breaking Dawn 1, we really … this is weird … tried to keep the first one sweet. It’s about self discovery…. But in the second one, we just wanted to be animals. We’re not human anymore. How do you do that? We tried, and they told us it was rated R, and we were like [snaps fingers]. So, yeah, I’m going to stop.” All right, so the awkwardness isn’t completely gone….

Ever the sport Robert Downey, Jr. made his Iron Man 3 appearance and the cast of the Game of Thrones showed up! I love seeing these actors in real life because they look SO different from the characters they play. Check out Alfie Allen (otherwise known as Theon Greyjoy). Adorable, right? He plays a weird degenerate in just about every movie he’s in but he’s the cutest thing ever! And look at Emilia Clark (Daenerys Targaryen) with dark hair. She needs to keep it silver! “I am Daenerys Stormborn and I will take what is mine with fire and blood!” Goosebumps! Can’t wait for Season 3!

I’ve also attached some photos of  Christophe Waltz looking like a hobo and Emily Blunt and Joseph Gordon-Levitt taking pics for Looper. I saw a trailer for that yesterday, actually looks pretty cool. Any Sons of Anarchy fans out there? I’m obsessed and posted a pic of Tommy Flanagan (Chibs). Love him.

And I’m finishing up with Kate Beckinsale and Jessica Biel outposing each other for Total Recall and Star Wars’ Mark Hamill looking a little portly. He could get to Jabba the Hutt size and it wouldn’t matter. He’s a God at Comic-Con.