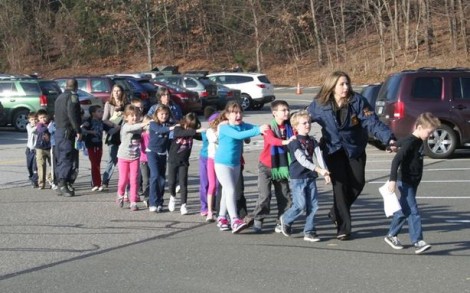 The country is in shock and mourning today as news spreads of the school shooting in Newtown, Connecticut. A gunman entered Sandy Hook Elementary this morning and killed 27 people, news agencies are now reporting. Most of the victims are children.

There’s a lot of conflicting information going on now but I’ll try to fill you in on everything I know so far. The shooting began at around 9:30 EST this morning and a mom at the scene told reporters that over 100 rounds were fired in the school that houses around 600 students. The gunman, who is tentatively being identified as 20-something Adam Lanza, is dead and his body was found in a classroom. It’s breaking that Lanza’s mother is a teacher at the school and she was found shot and dead though we are not sure where yet. It is believed that Adam had OCD and Aspergers. Police found two weapons, including a Glock and a Sig Sauer. Adam’s brother, Ryan Lanza, is being held for questioning but agents will not label him as a suspect.

The principal and a guidance counselor have also been found dead along with around 18 children. Students were kept calm during the tragedy because teachers told them hammering was going on outside. A press conference with Connecticut Gov. Dan Malloy is tentatively scheduled for 3:30 EST and President Barack Obama will also address the nation sometime today.

Any circumstance of a child being killed is beyond horrifying and this Connecticut school shooting is a tragedy of the greatest magnitude. Our hearts and prayers go out to all the families involved. There are conversations that will naturally be had regarding safety in schools and gun laws in the coming days but now is not the time. Hopefully the people of that community can find solace and compassion as they lean on one another today and throughout the holiday season.