Could Whitney Houston Have Been Murdered Over Drug Money? (Photo) 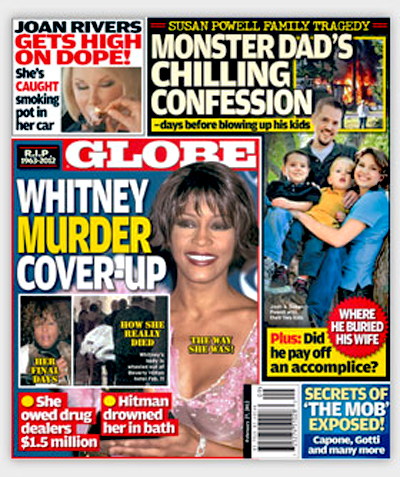 The current issue of Globe Magazine features the cover story ‘Whitney Murder Cover-Up.’ In a shocking allegation, the tabloid claims that Whitney Houston‘s death this past weekend was not the result of accidental drowning or an overdose. Instead, they claim that the late pop singer was actually murdered!

Supposedly, Whitney, who, despite several trips to rehab, couldn’t kick her substance abuse addiction, owed $1.5 million to her drug dealers, and a hitman may have killed her by drowning her in the bathtub of her suite at the Beverly Hilton Hotel when she couldn’t pay up!

As we previously reported, the 48-year-old singer was having cash flow problems at the time of her death, and even Nancy Grace has speculated that there seems to be more to Whitney’s death than meets the eye:

“I’d like to know who was around her, who — if anyone — gave her drugs… following alcohol and drugs, and who let her slip, or pushed her, underneath that water? Apparently, no signs of force or trauma to the body. Who let Whitney Houston go under her water?” the commentator said on CNN yesterday.

To find out more about Whitney Houston’s final days and the story of how she really died – pick up the current issue of Globe Magazine for all the details!