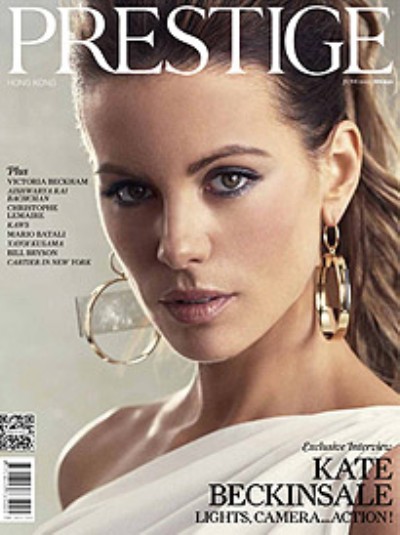 Kate Beckinsale is on the cover of Prestige magazine this month and hyping her upcoming summer remake of the Arnold Schwarzenegger masterpiece, Total Recall. It was directed by her Underworld director, and husband, Len Wiseman. She discusses what it’s like working so closely with her husband (I would go crazy!) and how she almost got stuck with three boobs. Check out some of the article below:

What about the work you’ve done with your husband – does it put any strain on your relationship?
I don’t really know about any power play. We really get on very well. We met on a film set and we enjoyed working together then, and we still do. I suppose if you have an argument with your director and you’re married, it’s more likely to continue, but it doesn’t really happen very often. We have quite similar tastes and one of the reasons we like working with each other is that we can see eye-to-eye on most things.

That leads us to Total Recall, which is soon to land in Hong Kong cinemas. How did the role come about – did your husband always want you to be involved?
Well, of course I was aware that my husband was involved with the movie, that he was writing the script and all that. At the beginning when he started working on the script, he said, ‘I’ve got you in mind for this,’ and I just thought, ‘OK.’ But when it came down to it, I was actually not available. I was very much aware of him going through the casting process while I was doing Underworld 4, so we were both a bit sad about it. But he was very grown-up about it and asked if I’d like to play the three-boobed woman, which meant being on set for about a day, so I said, ‘OK, I will.’ So for about three weeks I was going to play the three-boobed woman for an afternoon. But then the dates of my other film moved and suddenly I was available. It was a complete shock. I’d been familiar with it all so that helped, but I was straight into it.

How aware were you of the original version?
I’d seen the original but not very recently, and I made a conscious decision not to watch it again. I think there’s nothing really less creative than just trying to make something different from the way somebody else did it. It’s a very different tone of movie and I think it would have been very odd if I’d just tried to be Sharon Stone. My character, anyway, is sort of an amalgam of Sharon Stone’s character and Rachel Ticotin’s character. It’s similar in that I play the wife and I turn out to be not very nice. But the tone and context are very different.

I LOVE the fact she brought up the hooker with three boobs. I was pretty young when that movie came out, and my parent’s probably shouldn’t have let me watch it but I had older siblings so they gave up on raising me right pretty early in the game, and all I remember from that movie is the three-boobed hooker! And melting faces, there are melting faces somewhere, right? So I love that Kate went there in the interview. I saw a preview for the movie not too long ago and it looks pretty cool. Colin Farrell’s in it so I immediately know I will pay money to go see it in the theaters. I always thought Kate was crazy for leaving Michael Sheen for Len Wiseman during the first Underworld but he gets her roles so maybe it’s worked out after all.

Have you checked out the Total Recall trailer? Do you think it’s a summer must-see?