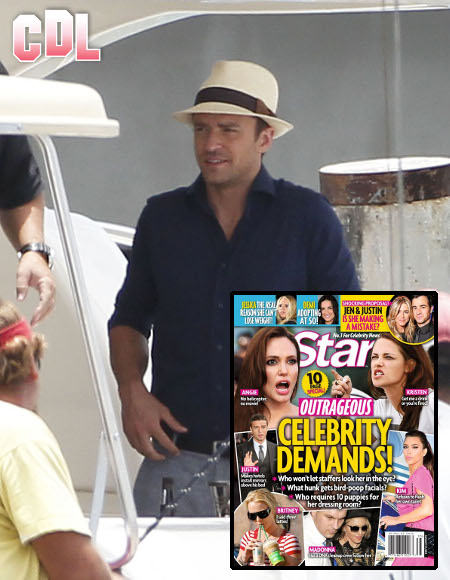 In the upcoming edition of Star Magazine, celebrities are being called out on their ridiculous, crazy demands. It’s no surprise to us that the Hollywood elite demand — and require — outrageous things to be done or given to them, but it does make us want to gag a little bit or curl up in a very tight ball and roll our eyes all day. The demands aren’t simple ones. The demands aren’t easy ones or even logical, comprehensible ones. They are merely the requests of celebrities, the royalty of popular society.

The cover reports that Justin Timberlake requires mirrors to be installed above every one of his hotel beds. Probably just to watch himself relax, right? Kim Kardashian‘s requests aren’t much better, as the magazine says that she makes people flush her toilets! That does require a lot of energy . . . I wish I had someone to flush my toilets. Check out the other demands featured on the cover: Madonna requires a DNA cleanup crew to follow her around everywhere she goes (You know, that MDNA is dangerous stuff); Britney Spears gets crazy and vicious with her coffee orders, demanding that she has three at a time; and Kristen Stewart threatens to fire people if they don’t get her a drink.

*le sigh* Doesn’t this make you want to be all of their friends? Yeah, right. This is just a really juicy cover this week. While the Celebrity Demands constitute the bulk of this edition, there are also a few other good stories in there, including one about the blandest couple in Hollywood . . . .

In the upper righthand corner, we get a glimpse of Jennifer Aniston and Justin Theroux, who recently gave Jennifer a fat diamond ring. There’s a lot of talk circulating around regarding this hasty engagement. Is Justin truly ready to make the leap down the aisle? Is Jen making a mistake by choosing to marry him? Don’t forget to pick up this new edition, which hits shelves on August 17th, to get your answers to these important questions.