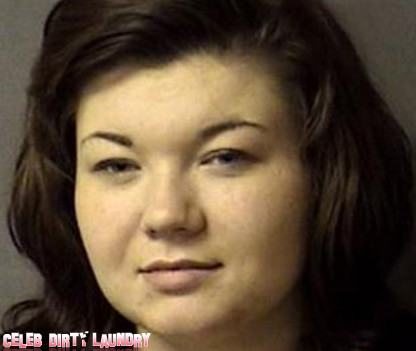 Crazy Teen Mom star Amber Portwood, who has been in and out of trouble — and jail — for years now, dishes out all the details regarding her suicide attempts and mental problems. Earlier this week, an Indiana judge ordered her to serve out a five year sentence on her felony drug conviction.  She had failed to comply with drug testing and other terms of her probation, and she now admits to several suicide attempts and various mental problems.

“I took 30 Suboxone within three days.  The depression took over. I’d just take four to five at a time underneath my tongue, and nod out. I had more than addiction problems. I had, you know, mental problems, too. I had been at such a low point, I couldn’t go any lower,” she said. “There’s nothing lower than trying to kill yourself. That’s why it’s probably hard to understand why I did what I did. But when you mentally know that, you’re not right. You’re 22, and you tried to take your life twice. And you’re 22, and you’re still here, you don’t want to mess that up.” Amber said in an exclusive jailhouse interview with ABC News Wednesday.

It seems that Portwood hit a bottom that meant jail was better, even in her own mind, than being left to her own devices.

“In my situation, I felt in the program there were a lot of eyes on me. And it was very uncomfortable. I was not using my anti-psych medication even,” Amber said in the interview.  “You know, I was very depressed, all alone, all bitter at everybody.  I felt like that wasn’t the life I wanted to live, I felt like I’d rather do my time, and get it over with, and make the best out of the situation that’s been handed to me.”

Portwood is best known for her stint on Teen Mom and her baby daddy, Gary Shirley, retains custody of the former couple’s three year old daughter, Leah.  The young mother is hoping that by serving time she will be forced to better herself and change her life.  She seems to feel like it’s something that she couldn’t accomplish on her own.

“You want to be free. Who doesn’t? But you know if you can’t do it, if you can’t do it, why are you kidding yourself?” she said.  “I’m going to take some classes, I’m going to get my GED, take as many programs as I can. You know, just try to better myself for when I do get out and not stay in prison … I’ll be off the drugs, I’ll have an education to get me a job, you have to think of the positives in this negative story.”

Seems to me her actions are desperate but it takes a lot of gumption to choose prison as a way to pull her life together once and for all.  Do you think she can change herself and come out a better mother for her daughter?  Hit up the comments and tell us your thoughts!