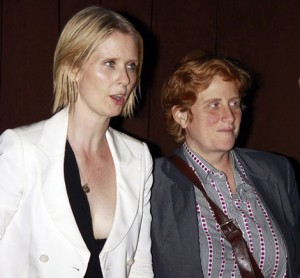 Cynthia Nixon’s girlfriend Christina Marinoni has now changed her status to married and is now officially Nixon’s wife and life partner. A big fat congratulations is in order for the longtime lesbian lovers who wed in a ceremony in New York on Sunday. Yay!

They’ve been engaged for three years after the Sex and the City actress said ‘yes’ to her woman at a same-sex marriage rally in New York. After being together since 2004 and then finally getting engaged a couple of years ago, Nixon wasn’t so sure how long she would be wearing an engagement ring. She was quoted as saying, “I’m enjoying being engaged very much. I don’t mind a long engagement, which this one is surely turning out to be.” But from what it sounds like it was definitely worth the wait as the couple was finally able to exchange wedding vows.

The wedding news was confirmed to People magazine via Nixon’s rep saying, “On May 27, 2012, Cynthia Nixon and her girlfriend, Christine Marinoni, were legally married in the state of New York. Nixon wore a custom dress by Carolina Herrera.” Come on guys, we want to see wedding photos!

The couple have a son Max Ellington Nixon-Marinoni together, who Marinoni gave birth to in February of 2011. Cynthia also has two children from her previous relationship with herit ex Danny Mozes. Well they are officially one big happy now! Congratulations, you two! Here’s to a long-lasting and loving marriage!

Could there be more kiddos on the way?