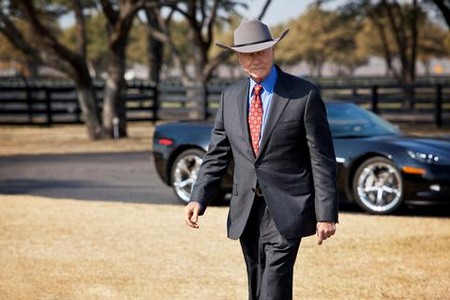 Tonight on TNT is the season finale of Dallas and what a season it was!  It was great seeing the old J.R. Ewing back! On tonight’s show titled “Revelations” in the dramatic season finale, family bonds bring the Ewings together as a loved one faces a medical crisis. If you missed last week’s show called “Family Business”, we have a full and detailed recap for you here.

On last week’s episode John Ross learned the value of family when he had to choose between blood and oil. Sue Ellen and Rebecca both found themselves victims of men who could destroy their lives. And the Ewings had to once again rally around one another when a medical crisis strikes.

On tonight’s show In the dramatic season finale, family bonds bring the Ewings together as a loved one faces a medical crisis. Christopher and Elena begin to learn that not everyone is who they appear to be, including the people closest to them. Long buried secrets are revealed as the past rears its ugly head.

I was skeptical when they announced a reboot of Dallas but somehow they have managed to find the perfect formula with the perfect mix of the new and just enough of the old favorites.  I am totally loving season 1 and the good news is that Dallas has been renewed for a second season.

Tonight’s episode is going to be an exciting and explosive one that you won’t want to miss, so be sure to tune in for our live coverage TNT’s Dallas tonight at 9PM EST! While you wait for our recap hit the comments and let us know what you thought of last week’s episode 9 of Dallas season 1! Also check out a sneak peek video of tonight’s episode below!

RECAP: Elena is in trouble, she’s got a dead body to get rid off, Tommy is dead after their confrontation. She makes a phone call and all off a sudden two people are helping her clean up the mess and dispose of the body.

Bobby was incapacitated by a cerebral Aneurysm and is now out of surgery, his vitals are stable but he hasn’t woken up yet and will need a full neurological exam to find out if he really is going to be ok.

J.R. visits Bobby and tells him to keep fighting, he goes on to say that he loves him and doesn’t know what he would do without him.

John Ross gets a phone call regarding the methane extraction testing from Vincente’s man; he wants to speak to Christopher.

Rebecca visits Christopher in the hospital and he notices bruises on her, she confesses that she had a fight with Tommy, but he is gone. Rebecca notices that Christopher has his ring back on, he tells her that he would really like if she did the same.

Christopher approaches John Ross and tells him that he wants his P.I. to find out if Tommy is still in Dallas.

Rebecca is in Tommy’s bedroom, she is scrambling to find the rings but can’t find them, so she calls the person that took Tommy’s body away and tells them that she needs to find something that he may have with him.

Bobby is awake and starts joking with Christopher and Ann. Meanwhile, Rebecca is in the back of a van with Tommy’s body, she finds a receipt in his pocket, he pawned her rings.

John Ross surprises Elena and takes her to an empty building, he tells her that it is the new home to Ewing Energies and looks forward to surprising Christopher. Then, John Ross pulls a ring out of his pocket, he gets down on one knee and proposes to Elena.

Rebecca is at the pawn shop, she bribes the store owner to try to get the rings back, he claims he sold them the day before.

Christopher arrives at the building, John Ross tells him it is the new home for Ewing Energies and a fresh start for the family. The three go on to toast the exciting news and Christopher notices the ring on Elena’s finger, Christopher tries to look happy for Elena and Christopher.

Rebecca keeps playing the confrontation with Tommy over in her head when Christopher walks in to surprise her with Chinese food for dinner.

J.R. visits Bobby in the hospital who tells him that he couldn’t die because there is unfinished business between him and J.R. Bobby reveals that Lou got the video files of J.R. conspiring against him with Martha, he tells him to stop this for good.

Bobby is getting out of the hospital, Sue Ellen arrives at the hospital just when he leaves and tells Ann that she is out of the race, she can’t compromise her morals just to be Governor. Ann doesn’t want her to quit, she doesn’t want Harris to win.

Christopher and John Ross are enjoying a game of basketball when J.R. arrives, he forces John Ross’s hand to admit his involvement with Veronica aka Marta and trying to take down Southfork. John Ross says that he will confess to everything but he wants assurances that nobody will tell Elena. Unfortunately for John Ross, Elena was listening in and she is furious, she takes off John Ross’s ring while he begs her to meet him at the new Ewing Energies space the next day, she leaves.

Ann goes to visit Harris and tells him that he won and she knows that he is blackmailing Sue Ellen just to get back at her. Harris hits on Ann, basically he tells her that if she has sex with him he will drop everything but she has a wild card, she’s taped the whole conversation, tells him, then hits him right in the face. Later she visits Sue Ellen in the park and tells her she has the recording, Sue Ellen is safe and can stay in the race.

Federal agents make a little visit to Vincente’s and arrest him. At jail, Bobby tells Vincente that he has a signed confession from J.R. and John Ross, it invalidates any contract that Vincente had with the Ewings. Bobby goes on to tell him that they have evidence about his conspiracy and Veronica’s murder on her cloud drive that they were able to retrieve.

As Vincente leaves, Bobby tells J.R. that if he crosses him again, he will use the copy of the cloud drive he has and have him prosecuted, J.R. replies that he wouldn’t have it any other way

At Southfork, Christopher tells John Ross that what he did is worse than what he could ever have expected. Bobby intervenes and tells the two to make the new business happen, put their differences behind them and bring some peace to the family.

The P.I. has found Tommy at a motel, he checked in two weeks ago and never checked out. While in the room, the phone rings, Christopher answers and the girl on the phone tells him it’s Rebecca, Tommy’s sister.

Chrisopther goes home to see Rebecca and tells her that he knows she is not the “real” Rebecca. Rebecca loses it and tells him that she is in love with him but she never had a chance with him because he is in love with Elena to which Christopher tells her that he is going to find out who she is and make sure she is arrested, then he is going to tell her babies what a lying piece of garbage she is.

No surprise, Christopher runs right to Elena and reminisces about when he fell in love with her. He goes on to tell her that he is finished with Rebecca, he will be a father to his children but he wants to marry Elena. He pulls her ring out of his pocket and hands it to her.

Sue Ellen is running for Governor while Elena’s mother meets John Ross at the new Ewing Energies building and hands him the ring he gave to Elena.

Rebecca has to explain to her father, Cliff Barnes, that she really screwed up. His men where the ones that got rid of Tommy’s body. Cliff tells her that she needs to go back in and get a piece of Ewing Energies and not lose focus again.

That’s it for the first season, what did you think? My favorite was the ending, I loved John Ross’ final words to J.R.