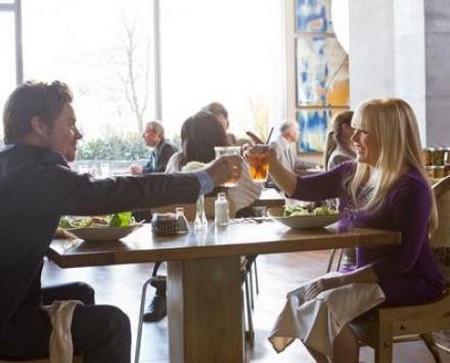 Tonight on TNT is an all new episode of Dallas. On tonight’s show titled “Collateral Damage”. When John Ross is pressured, he starts a feud amongst family members. If you missed last week’s show called “The Enemy of My Enemy”, we have a full and detailed recap for you here.

On last week’s show John Ross was bothered by the weight of having to do his father’s dirty work and decided to move into Southfork. Strife continued to grow between Ann and Bobby when it was revealed she went to her ex for help with a family problem. Rebecca tried to get back into Christopher’s good graces again by trying to help him save Southfork.

On tonight’s show a life-changing secret is revealed to Elena by Rebecca. Ann’s ex-husband demands an apology. John Ross meets with Lucy as he attempts to turn two family members against each other.

Meanwhile, John Ross is under pressure from his allies and tries to turn one family member against another.  A family associate is murdered, leaving everybody wondering who the culprit is.

Tonight’s episode is going to be an exciting and explosive one that you won’t want to miss, so be sure to tune in for our live coverage TNT’s Dallas tonight at 9PM EST! While you wait for our recap hit the comments and let us know what you thought of last week’s episode 6 of Dallas season 1!  Also check out a sneak peek video of tonight’s episode below!

Tonight’s recap: Tonight’s show starts with Christopher horseback riding and stopping at the tree where the words “Chris + Elena” are carved. He obviously is hurt just to see it and pauses before galloping off. Chris later lands in John Ross’s office and hands him the disk with Marta on it that he could have used against John. He warns him that although he intends to fight fair, he is still fighting.

Rebecca pays Elena a visit and offers her a gift basket as a token of gratitude for taking her to the hospital. She also apologizes for causing drama between Elena and Chris. The apology no sooner is said then Rebecca is running for the bathroom sick. Elena puts it all together and confirms that Rebecca is pregnant, 9 weeks pregnant to be exact. Elena pushes Rebecca to tell Chris soon.

John Ross meets with Lucy over dinner and asks her to talk to Uncle Gary. John Ross needs permission to drill and he promises that if Lucy can help him, he’ll give her a cut of Ewing Oil profits.

Chris just so happens to see Elena fighting to get her car started and so he stops to talk. He apologizes for how he handled past issues. She cuts him off and directs him to call Rebecca. She then blurts out that Rebecca is pregnant and that he needs to go and deal with her.

Meanwhile back at the ranch Bobby is arrested for assaulting Harris Riley.  He and his attorney discuss whether or not JR and Marta have done business behind his back.

Chris visits Rebecca and tells her flat out that he doesn’t trust her.  She reminds him that married or not, he’s the baby’s father and she expects him to be there.  She knows that he is nothing like his birth parents.  She then lambastes him for walking out.  Chris goes home and talks to Bobby and Annie about the pregnancy. Annie flips out when he tells her he wants nothing to do with Rebecca.  Since Annie is already upset, Bobby decides to tell her that he beat up Harris.  She storms out in tears.

John Ross tells Elena that he’d be lost without her and that she steadies him. Chris is still pining for Elena as he takes Rebecca to the doctor. She apologizes for the low comment about his parents.  He tells her that he’s sorry too, for falling in love with a liar.

Marta steals Elena’s phone and lures John Ross to her hotel room.  Once he gets there she is in a panic begging him for help. She insists she has been followed all day and since he got her into this, he needs to help her out. He storms out but by the time he clears the front doors there is a crowd gathering outside.  Elena’s dead body was tossed from the window and landed atop a parked car.

Chris goes to sit down with the doctor who joyfully tells him that not only is he the father of Rebecca’s baby, but that she is carrying twins.  He cries and cries, as does Annie.  Bobby apologizes to Harris for decking him and Harris gives him a sealed envelope that contains everything he needs to know about Annie.  He brings it to her and tells her everything he needs to know will come from her and then throws the envelope into the fireplace.  She hugs him as the envelope burns revealing black and white photos of her with a small child.

John Ross may have left the scene of Marta’s death but the police catch up with him and haul him in for questioning.  Make sure you tune in next week, Dallas is really heating up!