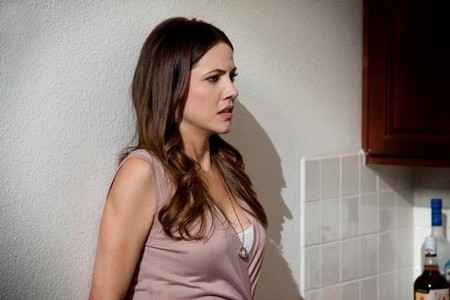 Tonight on TNT is an all new episode of Dallas. On tonight’s show titled “No Good Deed” has murderous intrigue surrounding the family. If you missed last week’s show called “Collateral Damage”, we have a full and detailed recap here for you here.

On last week’s show, Bobby was arrested for assaulting Harris Ryland who later demanded an apology from Bobby. Christopher demanded a paternity test when he found out from Elena that Rebecca was pregnant as she was with her when she had morning sickness. Ann flips out because Christopher wants nothing to do with Rebecca and get this, Rebecca is having twins. Ann is keeping a secret and Bobby knows what it is, something to do with a small child.

Sue Ellen told Elena to pick a side. J.R. discovered news about Cliff’s driver, Frank. After Veronica (fake Marta ) becomes an increasing threat, John Ross sells her out to Vincente, she is later found dead resulting in her death. He is later arrested for murder.

Tonight murder hangs over the Ewing family and they are forced to make crucial decisions for the best interest of everyone in the family. Christopher is excited when a large old company contacts him about rights to the methane technology. The Ewings will have to fight to protect Southfork when outside forces threaten them.

Tonight’s episode is going to be an exciting and explosive one that you won’t want to miss, so be sure to tune in for our live coverage TNT’s Dallas tonight at 9PM EST! While you wait for our recap hit the comments and let us know what you thought of last week’s episode 7 of Dallas season 1! Also check out a sneak peek video of tonight’s episode below!

RECAP: At police headquarters, Elena asks John Ross what he was doing in the hotel room with Marta. John Ross claims that he was set up. John Ross is booked, he’s on his way to the big house.

Sue Ellen is visiting John Ross and lets him know what she has hired the best attorney. John Ross tells her that his father wasn’t involved with this, he admits to having an affair with Marta and doesn’t want Sue Ellen to tell Elena.

Christopher is with Rebecca, she reminds him that he didn’t like when his parents divorced. Christopher tells her that she killed that dream and makes him feel only anger towards her and he doesn’t know if he can ever get past it.

Bobby is with the sheriff who tells him that unless Marta’s death is deemed a suicide, John Ross is in trouble. Christopher walks in and so does Elena, she tells them that John Ross may not even get bail. Christopher says that it is John Ross’ fault because he plays with snakes all the time and deserves to be bit. Elena reminds Christopher that they are best friends.

Christopher goes to leave, he asks the sheriff for a background check on his wife.

John Ross is in prison, dressed in his orange suit, he meets with Vincente and knows that he was responsible for Marta’s death. When he confronts him about it, Vincente threatens him and his family and reminds him that there was a video which can be edited basically to make it look like John Ross killed Marta. Vincente wants his oil, John Ross tells him to get him out of there, then Vincente replies with “your time is up”.

Christopher gets a visit from Exxon Global who want to buy the rights to  his company but Christopher won’t sell out.

Anne is with Elena who thinks she is bringing her babies into a terrible situation. Rebecca’s brother walks in and Ann tells him that he needs to leave and get a fresh start somewhere else, she offers him and job on her friend’s ranch.

Bobby gets a visit from Vincente who tells him that he fronted the money to his brother and until it is paid off, with the oil, he holds a lien on Southfork. Bobby tells him that he owns the mineral rights and Vincente better get the hell out of his house.

In Jail, John Ross gets a message from Vincente, a beating by two tough guys who tell him to speak to his uncle about  getting Vincente’s oil or next time, they will kill him.

Bobby meets with Lou who tells him that Vincente has a legally valid agreement.  Christopher is furious that J.R. did this to his family, Bobby wants to go to the US attorney’s office. Ann walks in and tells Bobby something happened to John Ross.

At the hospital, Sue Ellen tells the family that they beat John Ross senseless and he may have internal bleeding. Bobby urges Sue Ellen to do what she can to get bail for John Ross, or they will kill him.

Christopher is alone with John Ross when he wakes up, he admits it was Vincente’s men and they threatened to kill him just like Marta. John Ross reveals that the whole thing was taped the day Marta was killed and Vincente will alter the video to make it look like he killed her. John Ross blames trying to measure up to J.R. on his wanting to drill the oil and causing this whole situation

J.R. finds out that John Ross has been beat. Meanwhile, Bobby goes to visit his mother’s grave and tells her that he is trying hard to protect her legacy.  He goes on to tell her that the family is as fractured and dysfunctional as ever and he will do whatever it takes to protect them.

Bobby announces that they are going to start pumping oil on Southfork to save John Ross. Christopher walks in and tells him that he can give Vincente something better, an offer they can’t refuse.

Sue Ellen goes to the morgue to visit the Medical Examiner and tells him that the report needs to confirm that Marta’s death was a suicide. She reminds him that if he does what she wants, he can become the next Chief Examiner, or she will reveal that he has written more prescriptions than Michael Jackson’s doctor.

J.R. visits John Ross in the hospital, while Christopher is meeting with Vencente. Christopher offers Vencente exclusive Venezuelan rights to his company, in return, he wants the footage about John Ross to help exonerate him.

Sue Ellen visits John Ross and tells him that Marta’s death may be declared a suicide, just as a cop walks in and tells him that the charges against him have been dropped because they found the video and it shows Marta was alive when he left the room.

Sue Ellen is with John Ross, they just arrive back at Southfork, Elena runs to greet him while Sue Ellen gets a call from the Medical Examiner who is pissed with her, he risked his career and since John Ross is innocent, the real killer walks.

Christopher tells John Ross that he made the deal with Vincente because he realized that he and John Ross were not that different, they are both just trying to make their father’s proud.

Sue Ellen tells Anne that she bribed the Medical Examiner and she did it all for nothing.

Christopher goes to see Rebecca, he admits he did a background check on her and it’s clean. He tells her that he wants to let everything go, but is not sure that he can unless she tells him that there are no more secrets.

Rebecca’s brother Tommy is back, she wants him gone and tells him that she is pregnant. Tommy tells her that Exxon visited Christopher, his technology is worth billions. Tommy tells her he wants more money.