BY Robyn Good on March 27, 2012 | Comments: 5 comments
Related : Dancing With the stars, Dancing With The Stars Season 14, Reality TV, Recap 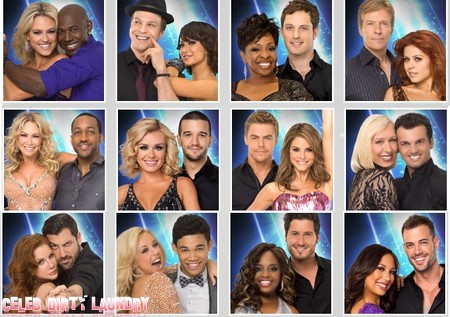 Tonight on ABC it’s the Dancing With The Stars 2012 it is the first result show off Season 14 and we will say goodbye to one contestant.  After performing two dances, one last week and one last night, one of the 12 couples will be going home.  Did you miss the performance show last night?  We watched it and recapped it for you – read our full recap of the performance show HERE!

After last nigh’s performance Katherine Jenkins topped the leader board.  The Welsh opera singer and her dancing partner scored 26 out of 30 for her jive performance, if you missed the show we have a video of Katherine’s performance here!  Roshon Fegan and Chelsie Hightower matched Katherine with 26 points (Performance Video Here), while Maria Menounos and Derek Hough came second in the leader board for their ‘Bonnie and Clyde’-inspired jive which gained her 25 points.

Tennis legend Martina Navratilova came bottom of the pile for her jive, with Bruno saying: “I think that serve went into the net.” (Performance video here)

Which couple is your favorite? Were you able to vote for them? Check out the poll here and vote for who you think is going home!

Country superstars Sugarland and talented singer songwriter Matt Nathanson join in on the fun for the Season Premiere of “Dancing with the Stars the Results Show.” Nathanson will perform his latest single, “Run,” featuring Sugarland in a special performance accompanied by pro dancers Tristan MacManus and Peta Murgatroyd. Sugarland will return to the stage for a second performance of infectious track “Find the Beat Again,” accompanied by four members of this season’s Troupe. Season 14’s Troupe returns with two new members, Henry Byalikov and Emma Slater. During Tuesday night’s show, the Troupe will be joined by the professional dancers of the season for an amazing performance, and by evening’s end the first couple will be sent home.

We will be live blogging the show with all the up-to-the-minute details at 8PM EST so make sure to come back to this spot and watch the show with us. Make sure to refresh often to get the most current update!

RECAP: Tonight the first celebrity and their professional dancing partner will be eliminated for the 2012 season. Last night the cracks started to show and some favorites lost their ground. Here are the couples in order of highest combined score from night one and night two.

Will one mistake be all it takes to shatter mirror ball dreams? We will soon find out. Having combined the judges votes with Americas, here are the results;