BY Annemarie LeBlanc on May 15, 2012 | Comments: 5 comments
Related : Dancing With the stars, Dancing With The Stars Season 14, Reality TV, Recap 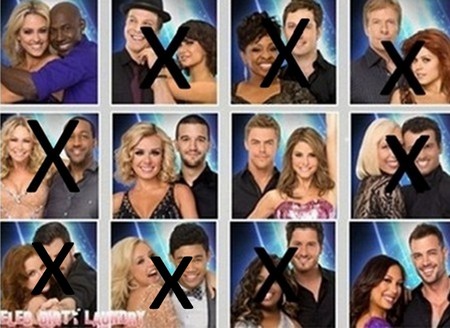 Tonight on ABC it’s the Dancing With The Stars 2012 seventh Results Show of Season 14 and it is the semi-finals.  Tonight we will say goodbye to one more contestant and we will find out which three couples will dance in the finals for the mirror ball trophy.

On last night’s show Maria Menounos emerged as the new frontrunner for the Mirror Ball trophy. William Levy and Donald Driver also received solid scores in the semi-final round.  Katherine Jenkins landed at the bottom of the leaderboard after she attempted a move which left her in pain.  Still the difference between first place and last place is only three points, which will leave fans struggling to pick a winner to move into next week’s finals.  If you missed any of last night’s performances, check out all the individual videos here.

On tonight’s result show, musical guest Carrie Underwood will perform “Good Girl”, the first single off her new album “Blown Away” and Alanis Morissette will perform her new single, “Guardian” from her upcoming album “Havoc and Bright Lights”.

In special performance, Julianne Hough will return to the stage for a rockin’ performance with her “Rock of Ages” co-star, Diego Boneta.

There will also be a final “Macy’s Stars of Dance” performance when they present this season’s “Design-a-Dance”.

Who are you  rooting for tonight.  I really cannot decided.  Most of my favorites are gone.  Hit the comments and let us know!

Tonight’s recap: Last night was the most dramatic night ever on Dancing With The Stars. This season has been beyond the judges wildest dreams. This has been the most competitive season ever.

What do you think of Maria and Derek being eliminated?  Hit the comments and let us know!