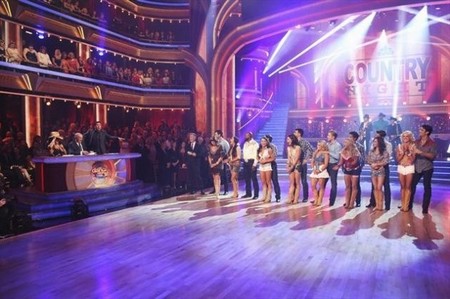 This week on Dancing with the Stars: All-Stars, the couples will face a marathon dance and a fusion dance chosen by their competitors. The couples are still reeling from the not-so-shocking elimination of Sabrina Bryan and Louis Van Amstel – the front-runner couple with the highest total score of the competition who loitered in the unsafe group for two weeks in a row. The show has once again turned into a farcical ménage-a-trois between the judges, the dancers, and the viewing public. We’re left with the most popular of the bunch, not the most talented. The marathon dance will be a long-awaited reprieve from the monotony of the weekly swinging, two stepping, and schmaltzy judging.

According to the official ABC press statement, the marathon dance will work as follows:

These points might not make a massive difference to the eventual elimination, but it will make a difference in the overall standings of the night. A low scoring couple can easily be bumped into first, second, or third place by coming first, second, or third in the marathon dance. If the scores are exceptionally close to one another, like last week, these extra points could make a humungous difference to the final standings.

We all know by now that this season of DWTS is based on popularity and popularity alone. However, several of these couples have long overstayed their welcome – (cough) Kirstie Alley and Maksim. A presidential stay of execution will take place on Tuesday, due to the U.S. elections, so no elimination show will be aired this week. (Did you also just hear the collective sigh of 7 dancing couples?)

How do you feel about this season of DWTS? Are you also as fed-up with the popularity vote as we are? Have you long since tuned out of the show? Let us know your thoughts in the comments below, as we’re dying to hear what you think about the All-Stars season. Remember, stick to Celeb Dirty Laundry for all of your DWTS news, reviews, spoilers, recaps, and critique.