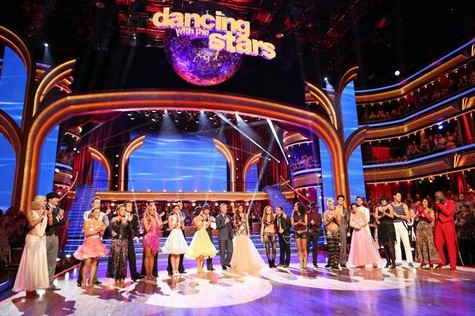 We have a little surprise for you dear readers! Call us psychic, call us the DWTS tooth fairies, but we’re bringing you a little spoiler of tomorrow night’s show. Last week, we were crying on a political line made from Bristol Palin’s hair when the controversial left-footed dancer wasn’t voted off, so this week we’re at it once again! This week not one but two celebrities will be sent packing.  Who will fail so miserably that their mothers will weep in teacups? Who will blast away the competition with their chutzpah? Who will be going home (we know it won’t be Bristol)? Who will make DWTS history? Will Apolo Anton Ohno say “Oh no”? Faint-hearted spoiler haters should look away!

The couples will be dancing iconic numbers this week. What is an iconic dance on DWTS we hear you ask? According to the DWTS Wikipedia page, “Celebrities must chose an iconic routine from the previous fourteen seasons and perform it but try to make it as ‘iconic’ as it was previously.” We’re already cringing in our chairs! This will be the first time ever that the celebrities “have taken charge of the creative direction of the routine”.

Let’s take a look at Bristol Palin and Mark Ballas first, shall we? According to Pure DWTS, Bristol and Mark will be recreating the futuristic Paso Doble by Derek Hough and Joanna Krupa from the 9th season. We doubt Bristol and Mark would be able to pull this one off, as it was one of the most show defining dances in the history of DWTS – Derek Hough was nominated for an Emmy Award for this performance. If only Bristol and Mark could see into the future, like us, and know that their place on the show is in jeopardy every single week, even if they receive the highest scores, they wouldn’t dare to attempt this masterpiece – they would bow out and watch Flashdance.

Sabrina Ryan and Louis van Amstel, the highest scoring couple of last week, will be recreating Mel B and Maksim Chmerkovskiy’s Paso Doble of the 5th season. Sabrina and Louis have been doing extremely well so far this season, so if they pull off an iconic dance of this caliber, they might receive a one-way ticket to second place (obviously we’re always keeping open the first place for Bristol – she deserves that at least, you know, working so hard on not-dancing and garnering political votes)

The highest average scoring couple of this season is Giles Marini and Peta Murgatroyd (her last name sounds like a goiter). They will attempt to recreate Erin Andrews and Maksim’s 10th season Tango, which has been labeled as one of the most underscored dance routines in the history of the show. Their obviously high scores for this dance will kick them even higher up the average score chart and hey, maybe they might be able to beat out Bristol and Mark for first place in the end? We highly doubt it, but we still have hope!

Prepare your ears for the elimination episode, because the soon-to-rock-the-world Karmin will be performing their catchy single “Brokenhearted”. We’re in for a massive DWTS week (and a double elimination), so strap on your Alex headgear from Flashdance, put Baby in that damn corner and dance on a taxi with your friends from Fame.

In order to whet your appetite, watch the video of Karimn here –

The other couples will dance the following:

Let us know in the comments below which couple you’re looking most forward to seeing this week!