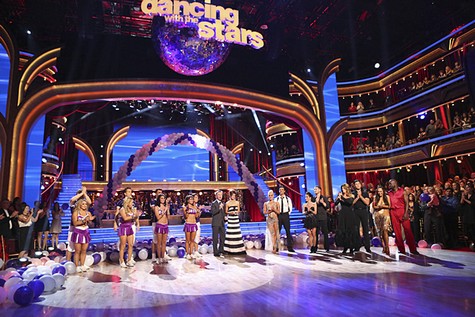 Tonight is an all new episode of DANCING WITH THE STARS ALL-STARS and tonight is night 2 of “Guilty Pleasures Week.” The competition is getting intense with two nights of dancing this week.  Did you watch last night’s first episode?  We did and we recapped it here for you!  Did you see last night’s performances, we have all the videos here for you!

This week, the show was marred by an injury (Melissa Rycroft), a presidential debate, and no elimination. The shortened one-hour episodes might have a lasting impact on the competition, as the scores are added from last night, tonight, and the team dances. Next week, the elimination show will be based on three episodes of DWTS.

On tonight’s show the four couples who performed their Team Dance on Monday night will dance their individual dances to their selected ‘guilty pleasure’ song, and the other four couples will take their turn on the dance floor with their Freestyle Team Dance.

Tonight’s episode is going to have all the usual glitz and glam in the ballroom, which you won’t want to miss. So be sure to tune in for our live coverage of ABC’s Dancing With The Stars All-Stars Week 5 Performance Show Night 2– tonight at 8PM EST!  While you wait for our recap, hit the comments and let us know what you thought of last week’s episode of Dancing With The Stars All-Stars.

Len: “I am going to give you a verbal pat on the back, you performed it excellently, you could have snapped a little more but I know you have an injury. I rally enjoyed it!”

Bruno: “Melissa you fantasy creature, that was intoxicating.  Your character came to life beautiful, you are sexy.  Your top line could be better but I think it was your injury.”

Carrie Ann: “I agree with them you were absolutely gritty tonight.  I do agree your torso could have been a little straighter, but you have a an injury.  Good job!”

Len: “For me it was a Dickens novel, I had great expectations and it was Bleak House.  There was no hip action.  I loved the number, but it was not a Rumba.”

Bruno: “That was awesome, ever changing shapes.  It was like waves in the ocean, I was with you every minute, touching and romantic absolutely stunning!”

Carrie Ann: “I feel like a proud mama, you have grow so much.  That life was fantastic but I have to send to your room, because there are not lifts.  Alright (people boo)”

Bruno: “I thought you were terribly sexy, your timing was good everything was good You did a great job, a really, really good job!”

Carrie Ann: “I think your leg work is fantastic and the way you use the floor is amazing.  But, something is not right.  It is good but not where Apolo should be, the chemistry is a bit out of sync!”

Len: “I love the story, it had a beginning, a middle and an end.  It was such a charming number!”

Bruno: “It was like a magic ride into an enchanted kingdom.  You went for it.  It fit the show.  Delicious, careful with your shoulders, I loved it! “

Carrie Ann: “I know you were going for vulnerability and you did not get it.  It was light and gorgeous and I think you are in for a happy ending.”

Len: “That was the craziest number I have ever seen, It was not tight, it was not together but it sure was  fun!”

Bruno: “Gilles give me that towel I am wet. (Gilles takes town off and gives it to Bruno) Thanks you Max, what entertainment value. WOW!!”