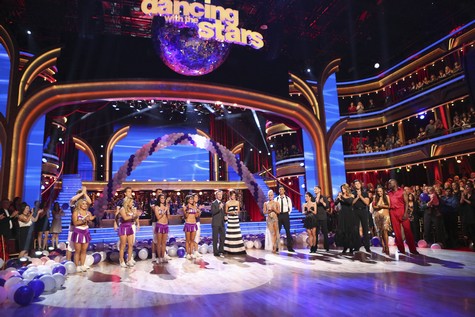 The second one-hour episode of DANCING WITH THE STARS ALL-STARS was equally mundane. The dancers danced, the judges judged, and the scores were tallied. Celeb Dirty Laundry’s full episode review is below; including our poll on who you think should be going home next week. The lowest score of the week goes Kelly Monaco and Valentin Chmerkovskiy, while the highest score of the week goes to Sabrina Bryan and Louis Van Amstel. We know low scores don’t kick out contestants, so who do you think should leave? Let us know in the poll below. We think next week might be Kirstie Alley’s time to go.

Melissa Rycroft and Tony Dovolani danced the Tango – The injured Melissa Rycroft received excellent critique from the judges. Len “really enjoyed it”, Bruno called her a “fantasy creature” and that it was “intoxicating” and Carrie Ann said they were “gritty”. They received a near perfect 9 points from each judge for a total score of 27 points, equal to their third week score. Their team score of 29.5 pushed their total of the week to 56.5/60, a middle of the pack above average score.

Shawn Johnson and Derek Hough danced the Rumba – This power couple received mixed reviews from the judges. Len loved the number, but didn’t agree that it was a Rumba, while Bruno likened the dance to “waves in the ocean”. Sigh, Bruno. Carrie Ann gave a near perfect score of 9 points, Len gave a below average 8, and Bruno gave one of the best couples in the history of the show a stunning 10 out of 10. Their total score of 27 is still the highest score of a three judge point, while their total team score is a middle of the pack, 56.5/60.

Apolo Anton Ohno and Karina Smirnoff danced the Samba – Len and Bruno loved it, while Carrie Ann was not too impressed. According to Carrie Ann, “the chemistry [was] a bit out of sync.” Carrie Ann also gave the lowest score for the couple, an 8.5. Bruno gave a 9, and Len gave a near perfect 9.5. This brought their total score to 27, their highest three judge point of the season. Unfortunately, their total score of the week is another middle of the pack 56.5/60.

Sabrina Bryan and Louis Van Amstel danced the Waltz – One of the highest scores of the night went to Sabrina and Louis. Bruno “loved it”, Carrie Ann said it was “light and gorgeous”, and Len said it was “a charming number”. Carrie Ann gave a perfect ten, and Len and Bruno gave a near perfect 9.5. Their total score of 29, added to their 29.5 team score, makes them the highest scoring couple of the week.

Team Dance – Gangnam Style – Kirstie Alley/Maksim Chmerkovskiy, Giles Marini/Peta Murgatroyd, Kelly Monaco/Valentin Chmerkovskiy, and Emmit Smit/Cheryl Burke, took on one of the hottest dance styles in the world. Len didn’t believe that it was tight, nor together, but it “sure was fun!” Bruno said it had amazing entertainment value, while Carrie Ann called it a “hot mess crazy fun insanity”. Unfortunately, the total score for the team number was 27, 2.5 points behind Monday night’s team.

Emmitt and Cheryl’s total score of the week – 56.0