BY Renier Palland on September 26, 2012 | Comments: 4 comments
Related : Dancing With the stars, dancing with the stars season 15, Reality TV, Television 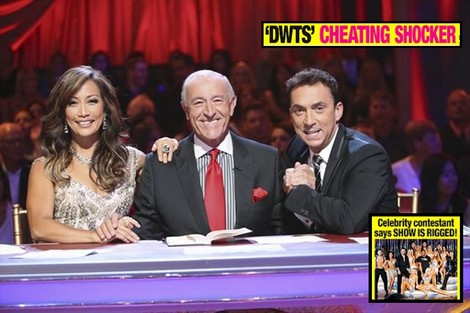 Dancing With The Stars has been the C-list celebrity platform for 15 seasons. The show has seen winners as defunct as Donny Osmond and as famous as Nicole Scherzinger. It has, however, come to our attention here at Celeb Dirty Laundry that the famous dancing reality television show has been rigged. Yes, ladies and gentleman, the popular dancing extravaganza with the campy judges and over-the-top outfits has been a lie all along. Let us begin shall we? Oh, and will all of the conspiracy theorist please sit down? The moon landing was real and Elvis isn’t alive.

Back in November of 2010, a large portion of the DWTS viewing audience came to the conclusion that the show was rigged when the producers forced Bristol Palin into a finale position. Bristol received below average scores throughout her season on DWTS (her and Mark Ballas scored the lowest of all the contenders on six different episodes of the season), but was still extremely well received by the audience. Conspiracies have always run the gamut of most reality television seasons, from Survivor through to American Idol. It is nothing new for a show of this caliber to be brought under the spotlight of nervous conspiracy theorists and super fans, but what sets DWTS apart from the rest of the garden variety productions is that it has been dogged with rumours of voting blocs and pre-celebrity popularity voting.

These rumours have been vehemently denied by the producers of the show, but it seems that the show just won’t lose the cloak of conspiracy any time soon. According to the latest National Enquirer issue, a headline reads that the show has been rigged to hell and back. Allegedly, one of the previous contestants (see below whom it is!) spoke out about the production secrets of the show and revealed that it is all one big fat lie. This is quite possible, seeing that these celebrities are being paid ludicrous pre-set amounts to appear on the show. In the land of celebrity, time costs money, especially when you’re being “contracted” for a full season.

Bristol Palin once again partnered up with Mark Ballas for the 15th All-Star season of the show and scored the third lowest amount of the premiere episode, 0.5 points ahead of Kirstie Alley/Maksim Chmerkovskiy and 2.5 points ahead of the eliminated Pamela Anderson/Tristan MacManus coupling. Will she once again make it to the final? Back in 2010, a website named Freerepublic.com asked 300 000 of the registered users to vote for Bristol Palin, while another controversially conservative site asked their users to “make liberal heads explode and vote for Bristol”. Jim Robinson, the founder of Freerepublic responded to the critique and said, “An organized conspiracy? I highly doubt that!”

Is a voting bloc unfair in reality television? Should the winners be chosen on “talent” and their own merit? Or should popularity be the overriding rule of thumb and allow the less “talented” contestants to win? The same situation occurred during the Kris Allen/Adam Lambert American Idol finale and while we’re not going to get involved in another Idol debate, there were rumours of conservative bloc voting for Kris Allen, while Adam Lambert was clearly the front runner during the season.

The Broadcast Standards Team oversees all votes on DWTS and they denied any wrongdoing on their part. Conrad Green, an executive producer of DWTS revealed to People Magazine in 2010, “Everyone is having a go at our system, but unlike American Idol, our professional judges count for half of the total for each couple, so there’s already a built-in attempt to make the dance quality matter. We set the rules down and this is the game and if this is how it turns out, then this is how it turns out. I think it’s absolutely fair.” We fully understand the built-in DWTS protection system, but vote rigging still counts for half of the vote. 50% can make the difference between a winner and a loser… The judges have also not been safe from the vote rigging critique. According to a Yahoo! TV article, the judges have been mostly co-conspirators with their reverse psychology methods during the live broadcasts. The article states, “They have the eerie habit of lavishing the best dancers with praise, almost as if they’re buttering them up to become slaughtered by the competition. At first, the judges hold a love-fest for the “front runner” and then later start favoring the underdog. Are the judges pulling a little reverse psychology on the viewers?”

Hope Solo, an Olympic soccer star who took part as a contestant on DWTS during the 13th season, revealed to the National Enquirer that her season was rigged in order to favour other celebrities. According to her memoir “Solo: A Memoir Of Hope”, she states a specific incident behind the scenes that led to her elimination. RadarOnline revealed the incident, “Solo, in her new tome Solo: A Memoir of Hope, points to an incident in which Maks — after learning via a “secret memo” he and Hope were scheduled to be eliminated — stirred up trouble with the judges to milk the ensuing controversy for a few more weeks of airtime. ‘Maks later told me that he had argued with the judges because he had been told we were going to be eliminated, that there was some secret memo going around that said who would be ousted each week,’ Solo wrote. ‘He explained that he wanted to cause some drama on the live portion of the show so that they wouldn’t be able to resist keeping us around, hoping for more fireworks.’”

Solo added the death blow to DWTS, “It seems to have worked — we weren’t eliminated that week.”

Do you think DWTS is a fat lie? Do you think Hope Solo suffers from a case of sour grapes? Do you think Bristol Palin was brought back to “win” this season? Will you still be watching the show after these revelations? Tango with us in the comments below and make your voice heard!