Who Got Voted Off Dancing With The Stars All-Stars Tonight 9/25/12? 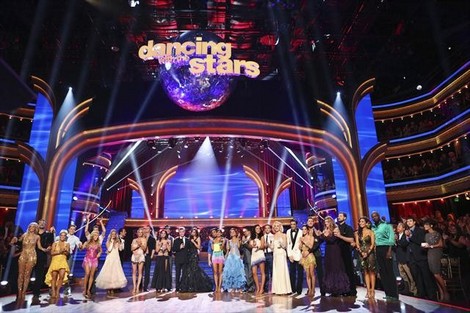 After  last night’s show at the top of the leaderboard is Emmit Smith and his professional partner Cheryl Smith who scord a 24.5/30 with their Cha Cha Cha.  Len Goodman commented, “The last dance of the evening and the best!”  Pamela Anderson and her professional dance partner Tristan Macmanus is at the bottom of the leaderboard with a score of 17 /30.  Following close to the bottom with her is Kristie Alley and her professional partner Maksim Chmerkovskiy .

We conducted a poll today to find out who YOU thought was going home tonight.  80.82% of our readers think that Pamela Anderson is on her way out tonight.  That sound pretty certain.  There is still time to vote go to our poll HERE!

On tonight’s result show, musical guests Global superstars Justin Bieber and Pitbull will hit the stage for unforgettable musical performances. Performing his second single, “As Long as You Love Me,” from his latest album, “Believe,” Bieber returns to the ballroom for a knockout performance. Pitbull also joins the party with the primetime television debut of his new single, “Don’t Stop the Party,” from his upcoming album, “Global Warming,” out November 19th.

Who are you rooting for tonight. I really cannot decided who I want to go home, maybe Pamela Anderson because she was not great.  There are so many fun and interesting dancers this season.  Who do you think will be eliminated on Dancing With The Stars All-Stars tonight?

We will be live blogging Dancing With The Stars tonight with all the up-to-the-minute details at 8PM EST so make sure to come back to this spot and watch the show with us. Refresh often to get the most up-to-date results!

Tonight’s recap: The very first results show of the season begins with a recap of last night’s competition. One by one the contestants’ return to the stage and we get to see another package on them. Many of the stars are on excited auto pilot but Pam Anderson is very emotional. She basically knows that she tanked last night and she doesn’t want to be sent home first. She agrees she didn’t put enough work in this week and is praying for another chance.

Joey Fatone came back because he placed second the first time and he wants to win now.  Drew Lachey returns first and foremost, because it’s fun. Also nothing will take away the fact that he’s the season two champion. Apolo Anton Ohno is back for the pure love of competition. Helio Casterneves loves the fact that this show pushes him for ten weeks and that is what brought him back. Do you notice they are all pretty much saying the same thing?

Melissa Rycroft is back for two reasons, the first being it was one of the best experiences of her life. Secondly, she’s a totally different person now, new baby and a different job. She wants to see if she can pull it off at this point in her life.  Gilles Marini is thrilled to have a second shot at the mirror ball trophy, plain and simple.

The judges decide that it is absolutely necessary to see Emmitt Smith and Cheryl Burke’s Cha-Cha-Cha once again so after everyone else goes upstairs, they perform it.

Shawn Johnson was ecstatic to get the call to come back and compete. She missed the challenge that gymnastics gave her so signing on for this season was a no-brainer. Sabrina Bryan came back purely for redemption. She went home too early the last time around and wants the chance to actually win.  Kirstie Alley is back for the love of dancing and she’s happy to be paired up with Maks, who claimed (kind of) that she’s his favorite partner ever.

Thank you to the professionals for waking me up with a fabulous routine choreographed by Jason Gilkenson to J-Lo’s dance again. I think I want to come back in another life as Peta Murgatroyd.

Finally results and Bristol and Mark Ballas are in jeopardy. Shawn, Apolo and Joey are all safe this week.

Pitbull gets things cranked up, debuting his new single Don’t Stop the Party, as the entire audience waves glow sticks and dances along with him and his chicks.

Here we go with more results- Helio and Kelly are safe. Drew is now in jeopardy and he and his partner Anna are joining Bristol and Mark in the bottom. Next up Sabrina, Emmitt and Gilles are all safe too.

I hate admitting this, but Justine Bieber actually sounded good in his performance of As Long As You Love Me and the choreography was pretty cool.  I’m still not a fan though!

Melissa and Tony are safe and so are Kirstie and Maks. Pam and Tristan are in the bottom and that’s not the least bit shocking.

Here we go, the couple with the lowest combined total that is going home is Pamela  and Tristan.  She says she was ready to be eliminated because the scores were so low. Tune in next week to see the remaining couples dance!